More cool than kitschy, more memorable than simply memorabilia, the live stage version of What's My Line? is both irresistibly honest and hokey at the same time. Men are gentle again, wearing tuxedos and pulling out chairs, and women aren't just women -- they're dames: gowns, gloves and all. It's a throwback to another time, but the comically "risque" questions are just as funny now as when this ran on late-night TV for 25 years, and with new panelists and guests "competing" (for fun) each week, it's simple commercial fun. 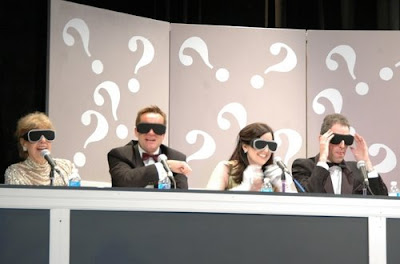 Way back in 2006, I entered The Atlantic's "Word Fugitives" contest, trying to come up with a word for "nostalgia for a time when I wasn't alive." Though I didn't win (that honor went to chronderlust), I'm glad I have the opportunity to use mine now, because I'm severely precedentimental after seeing What's My Line? Sure, I could always flip on GSN and tape one of the many late-night reruns (it ran from 1950-1975), but, far more satisfyingly, I could also head down to Barrow Street Theatre, and check out the live version playing there. More cool than kitschy (though there's certainly a wide variety of old-school gimmicks and cutesy pandering), the premiere "episode" (the 75th hosted by J. Keith van Straaten, but the first in New York City) suffered only from some technical issues, issues which it more than compensated for with its the host's hokey charm and the hilarious contrast between the panel's tuxedos and gowns and the set's flimsy yet funny charm. (There's even a house band, Shane Rettig & The Occupations, not to mention a hostess, Patti Goetticher, a pleasant dinner-theater Vanna White.)

The format for What's My Line? is simple: four panelists (a new set every week) try to guess the "line" (read: old school for "job") of several ordinary guests with less-than-usual occupations. The catch is that they're only allowed to ask yes or no questions, and if they run into a "no" ten times, the guest "stumps" the panel and "wins" the game. (To be fair, the panelists aren't paid, and the contestants all get complimentary tickets to Barrow Street Theater, win or lose.) To top off the evening, the panelists are blindfolded (more like blind-goggled, in a retro-chic fashion) and must guess who the Mystery Guest is, a task made only slightly easier by the knowledge that this person is a celebrity.

For this special premiere, the panel featured Barry Saltzman, a staple of the live show's CA incarnation (he's been on 17 times), Stephanie D'Abruzzo (the sweetheart and sass of Avenue Q), Betsy Palmer (an original What's My Line? panelist and, more notoriously, the original "Jason" in Friday the 13th), and Michael Riedel (NY Post columnist and co-host of Theater Talk, which helps explain what drew me -- and I'm very happy it did -- to What's My Line?). As for guests, the only trouble What's My Line? will have is in topping Patricia Porterfied (now Pat Finch), who appeared three times on the original show -- as the first panelist (hat check girl), a five-year-veteran (Broadway performer), and the last panelist (the farewell show). You couldn't ask for better symmetry than that: it's the sort of human element reality television "writers" only dream of. Hard to top the other guests too -- Alan Rosen, who brought enough food from his "office" to share with everyone (which is nice considering he runs Junior's Cheesecake), and Liang Wong, the youngest principal cellist in the history of the NY Philharmonic Orchestra (no surprise, either, if the two quick movements he played for us were any indication). And who's not happy to see Norm (George Wendt), the night's Mystery Guest?

The live version of What's My Line? is only supposed to be 75 minutes long, but I hope they reconsider; the night I went, not counting the technical delays in starting, was almost two hours. But these were full hours, not long hours: time well spent admiring how alike we all are, even given our different jobs and personalities. More than that, it's time well spent laughing -- not just at the staging, or the specific sort of questioning necessary to "win" (elimination-heavy questions are key, such as "Would I find this at the drugstore, hardware store, or grocery?" to which led D'Abruzzo to exclaim, "What? That's how people spoke back then!"), but at the good humor of the panelists, who are as serious about winning as they are comical when losing. Ms. Palmer, who's been down this route before, knows the drill better than the rest: "Does this piece of wood have to do with music? Can I put this piece of wood in my mouth? Does this piece of wood have a hole?" It's a shame that J. Keith van Straaten has a time-limit that forces him to moderate just enough to keep them on track (though at least he's funny about it); I could live off of questions like "Are you now a grown-up version of what you were then?"