Hello Failure is focused on the rich, excellent, substantive lives of seven submariner's wives who come together to discuss their feelings of isolation and purposelessness. However, Kristen Kosmas presents her material with overlapping text, fragments of thoughts, and gasps of self-confession that abruptly surface (and just as abruptly submerge), and the end result is often hard to grasp. The play is fixated more on the nuances of the conversation than what's actually behind the line ("sub"-text), and this self-inflicted meta-realism seems to be, like the characters, compensating for an absence of purpose. 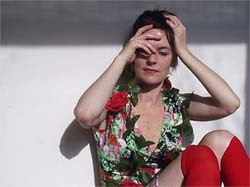 Oh, the horrors of being a submariner's wife. If we take Kristen Kosmas's word for it, every moment becomes excruciatingly poetic. If you're Rebecca (Kosmas), you feel submerged in a too-large home, until one day you can't ("I can't. Not today. Not today I don't think I can. Maybe never again.") bring yourself to get out of the bathtub. Or if you're Karen (Aimee Phelan-Deconinck), you feel trapped in the confines of a meaningless life, which you'd be fine with, if only the people at the soup firm could remember your name. And then there are the other four wives: Kate (Joan Jubett), whose self-obsession keeps her as closed off as submarine steel from the ocean; Gina (Tricia Rodley), who channels her frustrations into rage; Netta (Maria Striar), who tries to manage her own crises by carefully controlling everything around her; and Valeska (Janna Gjesdal), who has to maintain her own hippie-like perspective, lest the optimism chip away far enough for others to see her pain. Not to mention the New Girl, Margerie (Megan Hart), who -- in fear of her own fragility -- makes herself out to be incredibly strong in person. Perhaps you recognize something of yourself in them -- Hello, Failure, you might say -- or simply understand what might drive Karen to try learning Japanese, Kate to have an affair with her hairdresser, Netta to create another person out of her own happier past, or Rebecca to write letters to the long-dead, Civil War submarine innovator, Horace Hunley (Matthew Maher), in whom she feels she can safely confide -- even when he shows up in her bathroom.

All this is rich, excellent, substantive stuff. However, the way in which Kosmas has chosen to present it -- in overlapping scenes, fragments of introductory text, or gasps of self-confession that abruptly surface (and just as quickly submerge) -- is often hard to handle. These seams of isolation fit the characters more than they fit the framework of the play, and this self-inflicted style seems to be, like the characters, compensating for an absence of purpose. Ken Rus Schmoll navigates through those choppy waters with real purpose (and I suspect his work with Clubbed Thumb has well-prepared him for such deliberately damaged narratives), and as a result, there are pockets of scene work that hit like bursts of fresh air.

In one, Margerie leads the group in a meditative exercise: "You will never have a normal life," she says. "And that is OK . . . you will love your abnormal life the way an abnormal tiger mother loves its abnormal tiger baby. You can be at parties with other tigers who are normal tigers and you won't even bat an eye, it won't matter to you one bit because you are abnormal, and that is the way it was meant to be and that is the way it is and that is the way it will always be." What works here, and in the play, is that no excuse is made for the way these people are, and no easy solutions are offered: it's not so much learning to swim rather than to sink, it's learning how to breathe underwater once you've already sunk.

At another point, Karen, who often speaks in an aloof and distracted manner, tries to explain her recent enrollment in Japanese classes: "Because I. Because of my mind. Because I want to learn new ways of using my mind. Because I'm tired of all the old familiar ways that my mind wants to use itself. Because I want to make new pathways. Forge new paths. Like a barbarian almost, chopping away at the wilderness. I want to chop away at the wilderness of my mind. Like someone with a machete. . . ." She is having an affair with language in the same way that Kate is having an affair with Shlomy (Michael Chick), a gay hairdresser -- it's just another point of contact, a different approach.

I suspect that my resistance to the play is that it's too aware of itself, of its own structure: it's meta-realism, in which clever characters (and cleverer actors) speak well of the pain, but substitute the discussion of trauma for the actual experience of it, and leave with only the most artificial catharsis, having really dealt with nothing. These seven absent husbands are parts of the problem, but their stories are untold, and there's no way to make the expression of absence in a play ever feel complete. Kosmas compensates for this by injecting two men into the play: failing with Shlomy, a spineless character who comes across as a physical prop for Karen (and later, an improbable option for Karen), but succeeding with Horace, a quiet but commanding foil for everything Rebecca's struggling against (Mr. Maher, who has a distinct lisp, has the ability to making passivity seem either sweet or sinister, depending on the volume of his voice).