Room5001 Theatre's production of Man of La Mancha relies on only eight men and two guitars to tell the story of Don Quixote. This production relates Man of La Mancha to contemporary events while keeping the characters in the time and place of the Inquisition. The concept is unique, but does not necessarily aid the telling of the story. 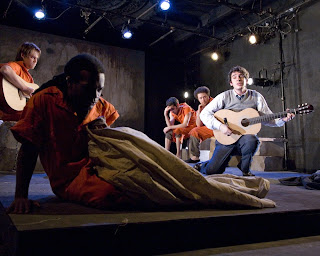 
Man of La Mancha tends to bring to mind grand images: Don Quixote fighting a windmill, expanses of desert, a servant on a hobby horse. However, Room5001 and Duo Theater's production of Man of La Mancha conjures up an entirely different set of images. The curtain rises to reveal six men wearing orange jumpsuits that bring Guantanamo Bay to mind. Cell doors are heard opening and shutting in the distance, loudly resonating through the theater. Cervantes and his servant Sancho are led in, wearing burlap sacks on their heads, escorted by a masked guard who carries a rifle. Cervantes has been arrested by the Inquisition and joins the other prisoners in the holding cell to await trial or whatever may come.

The connections between modern day torture, the tactics of the Inquisition, and Man of La Mancha are easy to make. Torture techniques are designed to make the prisoner forget who they are, to force them to reveal all, even untrue details while in a state of forgotten humanity. Alonso Quijana, aka Don Quixote, has forgotten who he is, with potentially dire consequences. The woman he has renamed Dulcinea clings to her real name, Aldonza, suggesting that in the midst of torture, prisoners struggle to remain their true identity. What does it say then, that in the end, Aldonza goes along with Quixote, insisting that she is Dulcinea? What was originally an inspiring moment becomes a frightening concept when viewed through the lens of torture.

In this production, everything stands in for something else, given the prisoner's limited means in acting out the play. The stand-ins further highlight Quixote's delusion—Aldonza gives him a dirty rag, he believes it a luxurious fabric. The musical numbers are performed using only two guitars, plus the occasional bucket and chain as percussion. The limited instrumentation seems to help the songs rather than hurt them—they sound fresh and energetic. Sancho's song, “I Like Him” is upbeat and cute and drew laughter from the audience. Yet the laughter seemed out of place, considering the circumstances, and made the production suffer from mood swings, going from goofy and rambunctious to solemn and brutal within seconds.

Room5001's production relates Man of La Mancha to contemporary events while keeping the characters in the time and place of the Inquisition. While the connections are intriguing, there are some issues with the production. It is difficult to understand the actors because they are shouting and occasionally they speak too fast. Additionally, the story suffers when stripped down so much. With everyone wearing orange, it becomes difficult to distinguish between characters, save for Quixote, Sancho, and Aldonza. While such difficulty could be interpreted as suggesting that prisoners lose their individuality and uniqueness, it also makes the play hard to follow.
The idea to connect the play to modern-day prisons is unique but the production doesn't quite go far enough in making the connection—the upbeat music prevents it from becoming too dark at any time. Still, the concept is an innovative one that takes some risks in changing the music and using an all-male cast (which makes sense considering that the prisoners are enacting the story). Man of La Mancha is saved by the familiarity of its story, but without that, it would be difficult to understand what exactly is going on.