Lin-Manuel Miranda's musical about a cheery community in Washington Heights has been scrubbed clean of any hard-hitting drama, but it's still a fresh, fun new show in its own right. In The Heights is best when it's playing to the larger-than-life atmosphere, rather than when it focuses on the rather simple problems of its individual residents. The whole confection is completed by Andy Blankenbuehler's merengue-flavored choreography, Howell Binkley's fireworks in the light department, Thomas Kail's constantly moving, urban-flowing direction, and Miranda's fusion of familiar Broadway tropes with the shaken-up spasms of rap or the multicultural beats and grooves of a whole new rhythm. 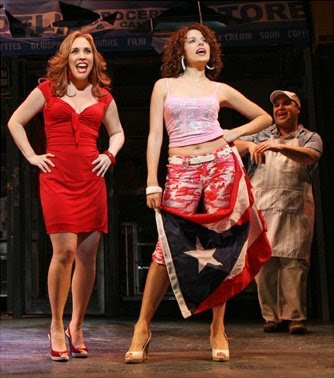 "Why learn the language when they still won't hear you?" asks a character from Lin-Manuel Miranda's cheery musical about community, In The Heights. It's a valid concern, but really of no more consequence to Miranda's show than it is within the show, for this young, charismatic actor/writer/musician has learned the language of Broadway, and his transfer to the Great White Way is a smooth one. He's greatly assisted by Andy Blankenbuehler's merengue-flavored choreography, Howell Binkley's (fire)working light design, and Thomas Kail's constantly moving, urban-flowing direction, but most of all, by his fusion of familiar Broadway tropes with the shaken-up spasms of his rapping, or his multicultural rhythms.

Of course, that line about language is also the one problem In The Heights is still saddled with. The person scowling that line is Benny (Christopher Jackson), and it's the one all-too-brief moment of racial angst in this play -- the only moment, in other words, of real drama. Kevin (Carlos Gomez), is a proud Puerto Rican, and while Benny might be good enough for his car service, he's not good enough for daughter, Nina (Mandy Gonzalez), though you'd have to bring your own cultural knowledge to know why. The rest of the individual plights are dim echoes of those familiar Broadway tropes: Usnavi (Lin-Manuel Miranda) is trying to build the courage to ask out Vanessa (Karen Olivo), the salon girl working next door to his bodega; Sonny (Robin De Jesus), Usnavi's cousin, is trying to make something bigger out of his street smarts; Daniela (Andrea Burns) and her cohort, the ditsy Carla (Janet Dacal) are all about the gossip; Nina's got a secret she's keeping from her parents (she lost her financial aid because she couldn't study at Stanford while also working the two jobs she needed to afford it); hell, even Piragua Guy (Eliseo Roman) has a story to sing about "scraping" by.

There are a few slivers of truth -- the harshness of Olivo's grim posture, the comic timing of De Jesus, and Miranda's energy -- but most of the solo songs are either too slick (as with Jackson's song "Benny's Dispatch") or lack conviction (Gomez's "Inutil," which needs far more sorrow and regret in the words "useless") and power (Priscilla Lopez's "Enough," which was out of her vocal range or not miked properly: either way, not enough). In this respect, I found even Olga Merediz (as Abuela Claudia, the neighborhood's proud and doting mother) to be a bit underwhelming in her big number, "Paciencia y Fe (Patience and Faith)," in which we learn that Abuela has just won $96,000. (Deciding how to split up that much money is good for a song about hopes and dreams -- the aptly titled "96,000" -- but it's far from being a dramatic spine.)

These are problems in miniature, though, and In The Heights does far better when it's larger than life. After all, this isn't so much a dramatic musical as it is a show about community: what defines a neighborhood and, more importantly, what keeps it going. The people are essential, but not as individuals, and this is what Thomas Kail and Andy Blankenbuehler tap into with their direction and choreography. Most of the smaller songs are punctuated by slow, subtle movements in the shadowy backgrounds of Anna Louizo's realistic street-side set, and all of the segues between numbers or scenes are handled deftly with brief dances -- buttons, if you will -- that bottle and tie together the mood of the musical. Furthermore, in order to be a true fusion of styles, Miranda needs a lot of people on stage at once, which is why ensemble songs, like "In the Heights," "96,000," and the finales to both acts are so effective.

You can boil the message of In The Heights down to one famous phrase: "There's no place like home." When Miranda and company are at the top of their game, truer words have never been spoken -- even for those in the audience who don't live in (or have never even been to, or heard of) Washington Heights. They do an excellent job of conjuring up the neighborhood, even if they obviously exaggerate the sights and sounds as they downplay the violence. (It turns out that Graffiti Pete is actually an alright guy, the people who fight in the local clubs -- well, they're first and foremost great dancers -- and although a store gets looted, nobody's hurt.) Besides, while there may be a trend for edgier new musicals, there's something to be said for flavor and style over substance every once and a while. I'd still primarily recommend Passing Strange or Spring Awakening, but the commute to In The Heights -- a fun, fresh new musical -- ain't that bad.