This wishy-washy work by Ernest Hemingway (thankfully, his only) is a series of scenes forced together into a lifeless three-act play. It's got booze, but no passion: it's not even strong enough to be Williams-lite. What may have -- could have -- once been a startling look at the truths of American involvement in foreign war is now a cold, passive revival of a dream that never was. 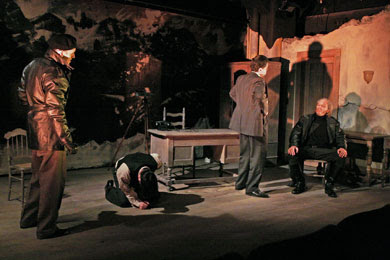 In his introduction to The Fifth Column, Ernest Hemingway writes that "while I was writing the play the Hotel Florida, where we lived an worked, was struck by more than thirty high explosive shells. So if it is not a good play perhaps that is what is the matter with it. If it is a good play, perhaps those thirty some shells helped write it." Like the statement, his play is wishy-washy: at some points, an ironic, self-deprecating look at the lifeless insistences of counter-espionage, at others a cheesy romantic comedy styled in the mannerisms of '30s movies (the play was written in 1937), and also a play about slow, hot days -- Tennessee Williams with the booze, but without the passion. Everything about Jonathan Bank's direction of this play is slow, including the scene changes, and perhaps that's meant to help the text itself seem more urgent -- but it's a failure, even in the interrogation sequences. What once may have been a startling look at the dirty truths of war is now a passive play filled with cryptic remarks and unfinished characters. (This is most obvious in Max [Ronald Guttman], who always seems eager to fight for the party, but just as ready to beg out of any actual consequences: "Please, please, please. I go.)

At heart, The Fifth Column tells the story of the doomed love between Dorothy Bridges -- " a bored Vassar bitch" -- and Philip, a notorious drunk and all-around mannerless man (not only does he steal Dorothy from Robert Preston [Joe Hickey], but he takes the guy's room, too). To that end, Heidi Armbruster is magnificent: she plays a bright-eyed optimist, too conceitedly American to know any better, and makes as a great foil for Kelly AuCoin's easy-going sarcasm. But as Philip, Mr. AuCoin is far too groomed and nothing shakes up his character: not the heavy drinking, not the night-time excursions looking for insurgents, not even the flirtations with the local tramp, Anita (Nicole Shalhoub). As a result, there's never any chemistry between the antihero and the dim damsel, and their love is as artificial as the quips that spring from their lips. Even the boozing, which can be a sort of heroic or romantic character trait, is cheery and edgeless -- so much so that if not for Jane Shaw's sharp sound design waking us with the crisp sounds of midnight shelling or the roiling chants of dissenters outside, there'd be no indication of Madrid being a war zone.

Perhaps, in an escapist sense, that's what Hemingway does here, retreating to the safety of writing from within the walls of a hotel that's actively being shelled. Hemingway even creates two personalities for Philip, a stark and dismal day-time self, and a starry-eyed night-time self. (Neither Hemingway's writing nor Mr. AuCoin's performance adequately capture this mood.) The result is a play that seems written day by day, in a mess of jangled nerves, and which was never cohesively edited back into a whole. There's no focus in the scenes either: at one moment, the play is making tacky jokes about Spanish citizens, with Carlos Lopez milking a terrible accent for comic relief in his role as the needy Manager. In another, Hemingway is boldly condemning American ignorance: Dorothy tells the maid, Petra (Teresa Yenque), that the shelling was lovely, as only someone disassociated from violence can. Petra replies: "In Progresso, in my quarter, there were six killed in one floor. This morning they were taking them out and all the glass gone in the street. There won't be any more glass this winter." What sells it, however, is Mrs. Armbruster's casual response: "Here there wasn't any one killed."

One could argue that The Fifth Column works as semi-historical documentation of the author's service as a war reporter, or as an intriguing contrast for Hemingway's novels. I don't agree that this play -- or this production -- works (unless one's battling insomnia), but I would urge them, simply on the occasional strength of pseudo-domestic life on the fringe, and the early signs of American foreign ignorance, to archive this play. I'd urge them to archive it today.