The Night of the Iguana

In a culture obsessed with removing any sense of ambiguity from art, it's a thrill to experience a Tennessee Williams play, where words communicate what actions could never reveal. 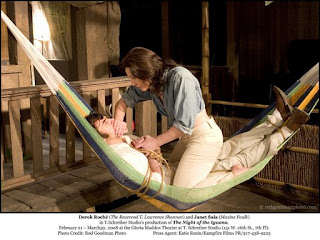 Tennessee Williams never had to rely on physical representations of the gruesome acts that his words depicted; his command of evocative language was always enough. When Catharine Holly detailed the tearing of flesh from the body in Suddenly Last Summer or Blanche DuBois related the events leading up to her tortured husband’s suicide in A Streetcar Named Desire, the mental picture that was transplanted into the mind’s eye was as vivid and unhinging as actually seeing the violence performed. The Night of the Iguana does not deal directly with this kind of brutality, but rather the psychosexual repression that leads to self-abnegation and, eventually, madness. It is a testament to longevity of Mr. Williams’ words, and to the brilliance of the director Terry Schreiber, that these themes communicate as blazingly today as when it was first produced over fifty years ago.

Set in 1940, the action centers around the Hotel Costa Verde, a charmingly dilapidated resort in the Mexican tropics. The proprietress is Maxine Faulk (Janet Saia), a recently widowed woman of loose morals and even looser limbs, who acts as both savior and, more ambiguously, mother to the Reverend T. Lawrence Shannon (Derek Roche). No longer a practicing clergyman, Shannon leads religiously specified tours through these backwoods, but cannot overcome the lustful shame that caused him to renounce his faith years back. Always a moment away from total breakdown, he constantly returns to Mrs. Faulk’s hedonistic bungalow. His current relapse is complicated by accusations that he has corrupted a young church soprano from the tour (Alecia Medley, perfectly strident) and the unexpected presence of Hannak Jelkes (Denise Fiore), a grifter with a heart of gold and a past to rival Shannon’s own.

In order for the play to work on all levels, it is necessary to assemble three immensely talented and appropriately galvanizing actors for the principal roles. At best, this production has one-and-a-half. Ms. Saia is thoroughly unconvincing as a woman who sustains herself primarily on rum cocktails, far too patrician in carriage and delivery to ably communicate Maxine’s libertine spirit. Shannon describes her as “bigger than life, and twice as unnatural,” but in Ms. Saia’s hands, she is as normal as heat in the tropics. Likewise, it takes Mr. Roche far too long to get started; by the time he reaches as appropriately fevered pitch, at the top of Act Two, the viewer is too distinctly aware of his acting to buy his dissent. Only Ms. Fiore is able to fully flesh out both her character’s inherent good nature and self-destructive streak; her delineation of her sexual repression and desire in the second act is chilling.

Where this production primarily shines is in the supporting roles, and the overall mood that the aesthetic vision creates. Mr. Schreiber skillfully plays up the work’s subtext by having the other guests at the hotel, a German family of four, doing cartwheels and crying for champagne when the news of the blitzkrieg reaches them. Their joy, juxtaposed with Shannon’s rapidly collapsing sanity due to the pain his malicious libido has caused, speaks loud and clear the fact that people are happiest when causing others to suffer. This moment of discovery is chilling. Second chances are also out of the question, as the Reverend is roundly fired by the tour leader, Miss Fellowes (the pitch-perfect Pat Patterson), at the first sign of mental and physical falterings.

Mr. Schreiber, along with set designer George Allison, beautifully captures this unique place in time, and lighting designer Andrea Boccanfuso is adept at projecting inner turmoil and insecurity through both bright washes and black, lingering passages that suggest a mind adrift in permanent night. The fact that the production is housed in an intimate theatre—150 seats, at most—only adds to the dramatic immediacy of Mr. Williams’ text. The Night of the Iguana has not achieved the warhorse status of Streetcar or Cat on a Hot Tin Roof (currently on Broadway for the second time in less than five years), but this production certainly makes the case for this dark and unsettling tale of self-immolation in a steamy hot climate to burn its way into the standard repertory.