There's a moment where the text of Ann Bannon's 50s lesbian pulp novels is really turned to flesh -- a hot, torrid scene of tangled emotions that feels real, despite the intentionally cheesy writing. But Leigh Silverman's sparse direction ends up focusing too much on the swaggering one-liners, and while Marin Ireland, David Greenspan, and Carolyn Bauemler find ways to balance witticisms like "We can't think straight because we always think gay" with honest lines like "Do you think some pretty twenty-five year old is going to fall for a bald, middle-aged bastard without a bank roll to offer?" the same can't be said for Autumn Dornfeld, who relies too heavily on telegraphed actions, or Jenn Colella, who has to work so hard to make us buy her brutish turn as Beebo that she has little energy left to do anything else. 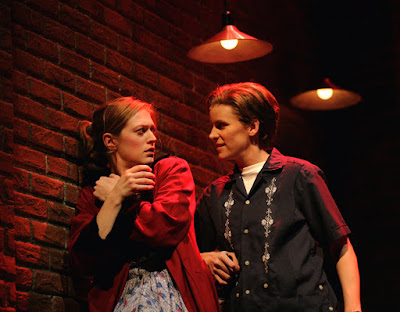 "Oh, Laura . . . -- darling -- I just can't do it," cries Beth, turning away from her lover. "I just can't can't. Oh Laura!" Beebo, currently serving as the narrator, looks at the two, Beth and Laura, and calmly continues with the story: "The whistle blew. Laura got up from her bench and walked swiftly toward the exit. Beth ran after her." The two girls share a brief, none too melodramatic look (think of Noel Coward's Still Life if you want the mood set right), and then: "Oh, Laura, Laura, please don't leave like this. Please." I know what you're thinking: it sounds hokey. And you're right, for The Beebo Brinker Chronicles is a stage adaptation by Kate Moira Ryan and Linda S. Chapman that aims to preserve the late 50s flair and fleshy pulp of Ann Bannon's series of lesbian fiction. But that's not a bad thing, for they've taken the clipped rhythm and one-line zingers ("We can't think straight because we always think gay"), and rooted them in a real struggle for happiness. If only the play didn't struggle so much to get its point across.

Beth (Autumn Dornfeld) lies impassively in bed with her husband, Charlie (Bill Dawes), unable to understand why she's no longer into him, and why they fight so much. "Does love have to be immoral or illegal before you can enjoy it?" he asks, and he's right on the money, for Beth has married Charlie out of societal fear, and now lives vicariously in her pulp novels, dreaming of how her life might have gone. And though her scenes are littered with exposition ("It's the 60s, not the 40s" or "We have two happy children" are my favorites), they're also harsh: "I'm not gay because I enjoy it," Beth finally confesses, shortly before traveling to New York to seek out the life she turned her back on nine years earlier.

Meanwhile, Laura (Marin Ireland) finds herself on a double date between her and a new friend, Jack (David Greenspan) and her roommate, Marcie (Carolyn Baeumler), and Marcie's ex, Burr (Dawes) that ends -- for novelty's sake -- at a gay bar in the heart of Greenwich Village. There, under the unabashed glare of Beebo (Jenn Colella), Laura starts to feel the emotions she's been repressing, emotions that Jack -- who turns out to be gay -- wants to help her express: there's no shame, he says, in being animals. (Greenspan is a riot throughout, especially armed with advisory lines like "What, do you think she'll quote a couple of lines of Sappho and she'll be ready to go pearl diving?")

The difference between the two women is striking: whereas Beth comes across as a cold fish who inexplicably hates her life, Laura is a fish out of water who -- although trembly and fragile -- plunges in, swims upstream, and finds herself. The difference between actors is remarkable too: Dornfield, as Beth, hurts her own performance by overplaying the role, and even takes the fish metaphor literally, with a constantly quivering lip that makes her insecurity into a physically repeating joke that needs to be serious, whereas Ireland, refining the high-strung energy that she's brought to roles in Manuscript or Bad Jazz, manages to grow from a comically embarrassed girl into a confident woman.

Such differences in performances wouldn't be such an issue if the show were better about distracting us from them. But this is Leigh Silverman's sparest direction -- the entire set always looks like The Cellar (the gay bar that's the hub of the play) and the lights are static and unappealing -- which means the emphasis is on the actors. (At least Theresa Squire's fantastic costumes -- especially an out-of-place riding coat for obstinate Beebo -- always make them look good.) Most of the time, Beebo Brinker Chronicles is sharp enough to thrill the audience, but that deeper surface rarely comes to light, as it does, for instance, when Beth's pulp-inspired fantasy is pitted against Laura's reality, with Beth excitedly reading a torrid scene aloud as Laura and Beebo turn the text to flesh.

That idea -- text as flesh -- is what's so sorely missing from the show. The swagger is there, the feel of the period is there, but the actual substance often gets caught up in the style. Nowhere is it more apparent than with the miscasting of Jenn Colella as Beebo: Colella does a great job acting, but she's always struggling with the fact that she in no way, shape, or form resembles a husky butch and her overcompensation takes away from the depth of Beebo's character. She grows violent, drunk, and possessive, but only the words take on menace: the flesh is dull. On the other hand, she's often paired up with Mrs. Ireland, who is able to amplify her own frailty so plausibly that Beebo seems tough (by comparison).

When the play is on, it's spot on -- something the comic timing of Carolyn "I'll be in the kitchen getting some chips!" Baeumler and the dry wit of David Greenspan nail down. And for all the struggling, Beebo Brinker Chronicles comes out largely ahead: funny, yes, but with well-crafted moments of sadness beneath that perpetual smirk or unflagging quiver. As an ode to pulp novels, the play succeeds; but as a narrative of sexual awakening, it's a little sleepy.
Posted by Aaron Riccio at 3/11/2008 07:52:00 PM