The Folding Chair Classical Theatre's latest "bare bones" production in which British officers cast convicts in a play (to reform, educate and civilize them) forsakes extravagant sets, social and political relevance, and theme for the plot and characters of the story. And although this may sound like an incomplete vision, nothing could be further from the truth in this superbly directed and acted performance. If you want to see a cast that will wow you with their investment in the material instead of wowing you with a big budget, you can't go wrong with this one. 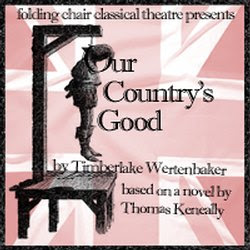 In 1788, rather than have the degenerates foul the land, England shipped their convicts far away to Australia for safe-keeping, out of sight. But instead of just putting them to work, Naval Captain Arthur Phillip (Ian Gould) had a radical plan: he wanted to redeem their self-worth by casting them in George Farquhar's restoration comedy, The Recruiting Officer. But not everyone was gung-ho about the idea, convicts and officers alike. Our Country's Good by Timberlake Wertenbaker is a recap of the opposition, casting, and rehearsal process for the production. And from start to finish, Folding Chair Classical Theatre's take on the story never ceases to grip, entertain, and delight.

Based on "The Playmaker" by Thomas Keneally, Our Country's Good takes us back to the basics of storytelling with few distractions. The action is ushered in with the sound of the didgeridoo, the Australian wind instrument considered to be the world's oldest. It is an eerie sound, but also a primal one that well-establishes several firsts of this play: first penal colony and first theater performance in Australia. Director Marcus Geduld makes the first of many clever decisions with the opening scene. As an officer whips a convict, the officer stands to one side, whipping air with a severity that would have been diminished were he actually striking the back of the convict; the convict cowers on the other side, making us believe that he feels each crack. This scene denotes the disparity in their shared experience: they're both participants, but the actions are individual.

Phillip's ideas about teaching the inmates culture and civility are met with disdain by Major Robbie Ross (Brad Makarowski), a staunch Marine. He can't see the good in using the "labor" to put on a play that, in essence, makes fun of officers, so he watches the process carefully for failure. Although the process never fails, it does have its setbacks. For one, there's the matter of the arbitrary hangings that were going on for reasons like stealing food; even Jean Valjean didn't get the death penalty in Les Miserables. Liz Morden (Lisa Blankenship), a thief by terrible circumstance, faces death when she is suspected of that crime. This throws a wrench in the rehearsal process because she's in the cast. Also, some of the convicts escape because of the lax security during the rehearsals. These are only two of the arguments that the military make against Phillip's agenda. But the military is not the only institution that Phillip has to contend with. Some of the convicts either don't like the material, are illiterate, or are too afraid to sign up. But between Phillip's dedication and Second Lieutenant Ralph Clark's (Paul Edward Hope) eagerness to direct, the cast and crew push forward.

Our Country's Good is full of wonderful characters brought to life by a well-disciplined, hard-working and skillful ensemble. Despite a few stumbles in dialogue and an overly theatrical and underdeveloped (because of the script) Aboriginal Australian (Jordan Barbour), the performances are strong and thanks to vocal coach Susan Stillman, the British, Irish and Malagasy (from Madagascar) dialects are superb. To keep things simple, Folding Chair uses costumes only to distinguish between military and prisoners (actors play multiple parts), not for vanity's sake. So when Dabby Bryant (Karen Ogle) declares that playing multiple characters will be "confusing" for the audience, you can't help but chuckle at the irony. Lucky for us, Folding Chair has it all worked out so that everything is clear, even in the complexity of the script and the staging.

Our Country's Good is not only engaging, but full of food for thought. From Midshipman Harry Brewer's (Gowan Campbell) regrets about former hangings to his admission of having committed the same crimes that these people were hanged for, his character demonstrates that sometimes there really is a fine line between those with a right to freedom and those who have been stripped of it. But like Clark, with his "I'm not a convict, I don't sin" sentiment and Ross' outright rejection of the notion of redemption, many of us are guilty of thinking that there is an abyss separating the free from the imprisoned. Wertenbaker bridges the gap between the two with romantic relationships that are voluntary, not forced, and a better understanding of each other's stations by the end of the drama. Hopefully, in addition to a great time, you'll have gained a new perspective on your freedom as well.
...........................................................