Leave it to off off Broadway to remind us of theater’s diversity. If you don’t think a play in the tradition of a comic book, video game, action flick, and sci-fi series can come to life on the stage, Vampire Cowboys Theater Company’s Fight Girl Battle World is here to prove otherwise. Fight Girl Battle World (which I’ll abbreviate as FGBW, to be streamlined and cool), with its complete set of stock characters, ingenious low-budget effects, and title that, in its perfect generic and cryptic sci-fi-ness tells us nothing and everything about this show, may be the most thorough and astute parody currently running in New York. 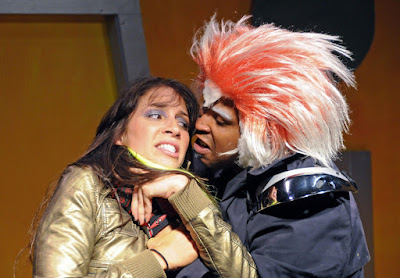 Most of the 50 seats at Center Stage were occupied the night I attended Fight Girl Battle World. However, not a single audience member looked older than 30, and after a goofy video starring two action figures told us to turn off our cell-phones, 90% of the audience was already rolling in the aisles. Once the show actually began, explosions of laughter followed almost without pause – obviously, most people here were in on the joke. As for the non-geeks (like me)? Would they get it? Thankfully, it’s safe to say that if you've ever ever watched a TV show set in outer-space or seen a brawny rather than brainy movie, then yes, FGBW will make you laugh. The satire is that spot-on, the sets, props, and costumes are that clever, and the actors maintain that high a level of silly energy throughout.

It hardly matters, but FGBW tells of E-V, the universe's last female human, who works as a kind of lowbrow prizefighter in a competition called Battle World. Kept as a pet by a two-headed alien, E-V lives a violent, repetitive, and pretty bleak life, until a certain General Dan’h, responsible for wiping out most of E-V’s species but now reformed and looking to set things right, approaches her with the idea of mating with the last male human in the universe (phew). E-V rejects the plan at first, but after her alien owner banishes her to a zoo, she braves intergalactic travel and battle with an evil space dictatorship to find her fellow human and replenish their species. And so it goes, complete with aliens and robots, combat, tight spots, sticky situations, weapons, bad guys, friendship, and a happy ending.

FGBW doesn’t use plot for forward propulsion, just jokes and action scenes that let the creators, Qui Nguyen and Robert Ross Parker, bust out their tricks. The soundtrack that bubbles and beeps in proper future-computer fashion and the cardboardy set that divides up the small space with remarkable efficiency both impress. The cast keep up the goofiness without faltering: as E-V, Melissa Paladino plays the heroine with the right mix of snarkiness, sincerity, and tongue-in-cheek awareness. Tough and gutsy, she spouts some futuristic profanity too: “qwarding,” “blark,” and “durk.” Other main characters have the talk and mannerisms down just as well, in particular Paco Tolson as LC-4, the robot who knows he’s an amazing feat of science, and Temar Underwood as General Dan’h, sporting the pseudo-English accent so prevalent among evil guys in movies set somewhere made-up. Elena Chang, as villain Mikah Monoch, deserves mention for a moment in which an alien language, sounding part-Korean, part-Vietnamese, and part-IBM, spills forth from her mouth in as fluent and convincing a manner as her English. But the remaining cast who play multiple small roles - the characters who tend to die in fireballs – show wondrous versatility. They play everything from a Slim Pickins-like southern-accented fighter pilot to an evil government commander that talks like a Russian-Australian hybrid. These three (Kelley Rae O’Donnell, Andrea Marie Smith, and Noshir Dalal) might be having the most fun of all.

But the coolest, and I mean coolest, component of FGBW comes in the form of simple effects that produce the archetypal action movie image every time, a testament to Qui Nguyen’s choreography skills and what must have amounted to hours of TV watching and XBox playing. Vampire Cowboys has received awards for its puppetry, and here it controls what the audience sees with use of a puppet theater-esque frame, the action happening within a window and the tricks taking place out of sight by the actors’ feet. Invisible below the knees, the robot TC-4 appears to drift in space while an unseen hand guides his weapon to float beside him. E-V and J’an Jah ride a fuzzy box with handlebars that bounces, shudders, and snorts just like a living thing and when they climb off, they drop down behind the frame so the animal appears six feet tall. Some tiny, adorable puppets sit on the edge of the window and squeak and jump, and the actors jolt and fall as if catching the wind from rushing spacecraft. In the big finish of a fight scene, two windows come out and four different actors play E-V in a multi-point-of-view showdown. Nguyen and Parker can even mimic camera tricks without cameras.

All this praise notwithstanding, let us not forget that FGBW does target a certain audience. The humor will go over the heads of most senior citizens or patrons of serious drama only. Trekkies will laugh more than non-trekkies. At times, FGBW succumbs to some of the pitfalls of spoofing: successfully imitating generic space-talk, in places the dialogue drags because, well, generic space-talk doesn’t say much. The plot that takes a back seat to the stage fighting, etc. makes for some slow moments, and though I understand the creators’ desire to get as many of those priceless parody montages in as possible, the show could be cut by about 20 minutes. Many of the scenes are kept short to imitate movie cuts, but where the other film-inspired reincarnations work, on a stage this effect comes off as choppy and we sometimes lose the thread of the action.

The attention to detail in FGBW warrants more discussion than possible here, and I don’t want to give away all the surprises. So after you crack open a beer (as a note in the program encourages!) and absorb the antics, keep the observations going over after-theater drinks – the talk won’t be deep, but it will sure be qwarding funny.
Posted by Sarah Krasnow at 3/09/2008 09:40:00 PM