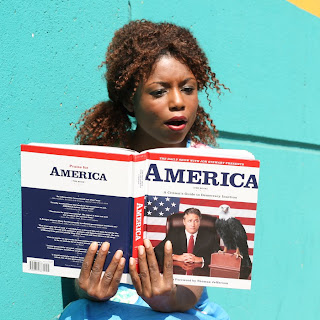 American culture is rife with people trying to find themselves. If they're not singing about their identity crises, they're talking about them on talk shows. Sometimes, these crises are a result of not knowing their birth parents. Just recently, a story was featured on the Maury Povich show about a young woman who had connected with a man (who was potentially her father) through Myspace. Too bad Scarlett, the main character of Melle Powers's new one-woman show Whence Came Ye Scarlett O'Hara O'Hanrahan? didn't know about Myspace until she landed in America. She could have logged on to ie.myspace.com (Myspace Ireland) and saved herself the trouble of looking for her birth mother on foot. Of course, then we would have missed out on the wide-eyed innocence and charm of this Wizard of Oz-like adventure; we wouldn't have seen Powers' incredible energy and ability to transform herself into several entertaining characters. Lucky for us, she was naive about America and intrepid.

Adopted into an Irish family, Scarlett didn't want for anything except a connection to her brown roots. She speaks of being the only brown person in her town, and how she is constantly under scrutiny for her rounder posterior, multi-ethnic hair texture, and her rhythm in dance. These are common gripes for brown people that don't dig very deep underneath the surface in the script, but they do create a feeling of familiarity. Tired of the solace that only her brown doll Lula provides, as soon as she turns 18, Scarlett jumps on a plane to New York to find her mom. We watch as she suffers through the grueling "pick a number" system at the Bronx records office, and laugh as she cites the experience as an unparalleled one. While in New York, she discovers brown people in all different shades, as well as other ethnicities and different types of people within the same ethnicity. She reels from her encounters with flavorful characters such as the Kangol-wearing Lionel, a hustler peddling wholesale goods on the street, a blogger named Pria, a down to earth celebrity named Lockhart Still (who she chats with dubiously on the street), and Kiki, a politically incorrect but apologetic VJ.

Although the characters in this piece are skillfully and comically played by Powers, some of them are stereotypical, as are the token assumptions about brown people that she struggles with. Her expectation of Americans being like Rachel and Ross from Friends is amusing, but also dated, given that the script also mixes more current pop culture references. It would have been great to see characters that have a more serious perspective on America, such as a homeless person or an MTA worker. It's ironic and funny that Scarlett runs to America to flee the judgment of the Irish when the characters she meets are almost all predictably materialistic and judgmental, but a ruder awakening for her in exploring what happens when New York is still would have been more poignant. Also, because the show is the exploration of a character coming across other characters, Powers' own identity is excluded. The show isn't biographical -- it comes across as the sort of woven-together skits you might have found on Chappelle's Show (on which Powers was a regular) -- and as a result, is missing the personal touch expected of a one-person show. Still, Powers appears to be having fun in everything she does, from her Irish version of step-dancing to the "hoochie" dance video, and in turn, makes us have fun, too.