Looking to have a qwarding good time? Then check out the high energy, action comedy adventure Fight Girl Battle World, a theatrical send-up of science fiction with some innovative fight choreography up its sleeve. Hot chicks, sarcastic robots, and bad-ass aliens: rarely does theater get so blatantly entertaining. 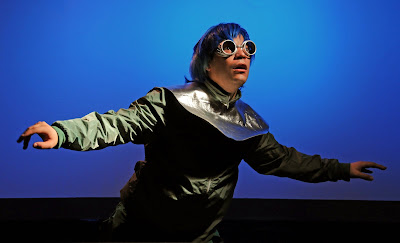 If you open your play with a series of outtakes between an action-figure Boba Fett and his tonton buddy, you've either got huge balls or you know exactly who your audience is. Vampire Cowboys Theater, the undisputed king of the action parody genre, has huge balls and they know their audience, returning to the same ground they covered in last year's Men of Steel, only this time, with a science-fiction spin: Fight Girl Battle World. They've got the vocabulary ("kilofraks," "durk," and "qward," for starters) and the hot guns and hotter girls to prove it. They've got a soundtrack that would make Quentin Tarantino proud: chase scenes set, tongue-in-cheek, to the Bob Dylan's "Handy Dandy," infiltration scenes accompanied by Beastie Boys' "Intergalactic," a hyperspace riff on 2Pac's "California Love," not to mention a climactic fight set to Evanescence's "Bring Me to Life." Beneath it all, Qui Nguyen's even got a passively subversive riff on the creation myth, as the last woman alive, E-V (Melissa Paladino), is sent on a quest by General Dan'h (Temar Underwood) to "bump uglies" with the last man alive, Adon-Ra (Noshir Dalal), a quest that pits them against the villainous President Ya-Wi (Jon Hoche).

Not that you'll have to read into anything in Fight Girl Battle World: the bad guys have sinister laughs (Elena Chang's Mikah Monoch), horrible accents (Andrea Marie Smith's Commander G'Bril), and ridiculous facial hair (Kelley Rae O'Donnell's Zookeeper); meanwhile, the good guys are filled with sarcastic quips (Paco Tolson's LC-4, a k a, the most endearingly arrogant robot since Marvin the Paranoid Android) and roughish charm (Maureen Sebastian's J'an Jah, not just a pilot, but the male of her species). Exposition is straight-up laughed at (after breaking in to kill the president, Adon-Ra explains: "I could go into the long explanation, but it'd be merely expository"), and Robert Ross Parker's direction seamlessly jumps from scene to scene, with actors suddenly dropping out of sight as others pop up into view, like a revolving reel on an old toy viewfinder.

You won't have to think about much, either: the dialog is filled with geeked-out in-jokes for both sci-fi and theater buffs ("Z-Class starfighters" and the diss "Wanna phone home?" go right up there with a play LC-4 wrote called "Death of a Space-Man"), and whether you get them or not, you'll laugh just from the pure energy and charm of the whole cast. Even the slowest bits of the play -- like a reminder from some sort of Smokey the Ursa Minor that "only you can prevent humanity" -- have a purpose, like letting you (and the actors) catch their breath right before another fight scene.

Oh, yes. There are fight scenes. Qui Nguyen doubles as the choreographer, and he take the opportunity to try out a lot of techniques I've never seen before. In an early clip of a "grainy video", the shifting positions of a flashlight behind a scrim cast amplified silhouettes that jitter against the screen, playing with depth perception and height. In another, Nguyen uses body doubles to allow him to play with perspective, a cinematic move that helps him nail the instant replay. And, c'mon: the dude also turns a puppet spacefight into a martial arts showdown: "What in the qward was that?" asks Dan'h, as three actors fly hand-guided ships at one another. "I think they just bit us." Granted, there have been smoother fight scenes on stage before (like in The Jaded Assassin), but they've never been so funny. (And kudos to the actors without professional training: that makes their physical control even more impressive.)

Given the current trend of film adaptations (Spider-Man, Batman, and The Addams Family musicals), it's only a matter of time before Broadway taps someone for Star Wars: The Musical. Hopefully they'll ask Qui Nguyen and Robert Ross Parker for some advice, because they've done a really durking good job.