If you can believe his fictional autobiography, Stew had a religious experience listening to rock 'n' roll in a local church service; it's a pleasant surprise to see his Broadway show trying to pass that rock 'n roll back to its audiences as if it were a religious experience. Nonconformist more than non-traditional, it's good that Passing Strange has managed to pass as a Broadway musical, because it's the sort of powerful show -- philosophy with a beat -- that everyone who has ever struggled with art or had an identity crisis should see. 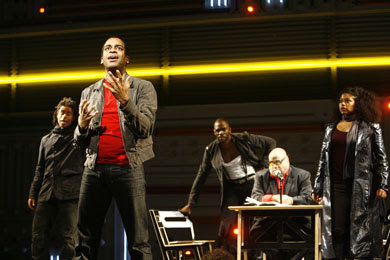 There's a lot of talk about "passing" in the excellent new Broadway musical, Passing Strange: our hero, a Youth, passes himself off as a choir boy, punk rocker, European rebel, troubled urban youth, and German artiste, as he struggles to find his identity, his song. But most fortunate of all is that Passing Strange has managed to pass itself off as a Broadway musical, when it's more of a rock-and-roller-coaster ride -- philosophy set to a beat -- that defies every standard it can get a hold of. And that's a good thing.

Stew, the narrator/writer (and Youth, all grown up), opens the show without a mic, then calmly announces: "We're gonna play some music." Later on, he'll cut from the action to announce the intermission, or to relay a story about a particularly deep pretzel vendor. There's no set, just a shimmering curtain, and behind it, a light wall (a cross between the minimalist neon of Spring Awakening and the pointillistic chromolume of Sunday in the Park with George). There's dancing, but it hardly seems choreographed so much as agitated: a physical necessity brought about by the intensity of the song. And even when the show falls into classical stage tropes, as in "The Black One," it's tongue-in-cheek on the level of, say, Urinetown. And the songs, they pass, too, as anything they want, be it a punk-rock send up on "Sole Brother," a psychedelic soft-rock hit for "Must've Been High," jagged avant-garde screeching on "Surface," not to mention drips of industrial, funk, soul, gospel, or simply songs that can do it all at once, as with the theater-shaking power of "Keys." While our hero can't hear the difference between the sacred and the profane, we can: and these songs are all the former, colored with splashes of the latter.

In the six months or so that this play has spent transferring from an Off-Broadway run at The Public (where it was plagued by poor acoustics and a three-fourths-in-the-round staging), Passing Strange has grown into an ever better show. Portions of the first act have been rearranged and the jokes seem punchier; more so, Daniel Breaker, who plays the Youth, seems to have a lot more to do. Those who remember him from Well know that he's good at physical comedy, and although the stage at the Belasco is bigger than at the Public, Annie Dorsen has made Breaker's presence more visible, while still allowing him to grow, scene by scene. And Eisa Davis, who returns as his mother, is even better at switching between a cheerful Today-like dialect and what Stew calls "the Negro dialect." As for the rest of the original cast -- Colman Domingo, de'Adre Aziza, Rebecca Naomi Jones, and Chad Goodridge -- they're still excellent in their tripartite roles, splitting between disaffected youths in Los Angeles, friendly pot-smokers in Amsterdam, and revolutionaries in Berlin. Domingo's still the scene-stealer, spry and serious as the Reverend's repressed son, Franklin (he wishes he were a slave, for they had options, whereas he, as a coward, has only consequences), and cagey and crazed as Mr. Venus, a cross between Riff-Raff and the Emcee.

Unfortunately, there are still problems with Passing Strange. While the first act is much slicker, and bounces strongly from the comic to the serious, the second act, for some reason, seems to have lost the emotional resonance it had off-Broadway. It's not an intimacy issue -- if anything, Dorsen's direction has tightened the focus of the actors who interact around and with Stew, not to mention their easy and often entertaining rapport with the musicians (Heidi Rodewald, who co-created the show; Jon Spurney, Christian Cassan, and Christian Gibbs). And it's not like Mr. Breaker lacks credibility -- his Youth's arrogance has softened and cooled through regret, shame, and sorrow by the time he delivers the climax's eulogy. But something seems rushed through, almost as if the play ends after the emotional duet between Narrator and Youth on "Work the Wound" (though it continues for another two songs).

But don't let that indefinite quibble stop you from seeing Passing Strange. More accessible than ever, yet still just as provocative, it passes with flying colors (literally, if you count the light wall). And ultimately, as Stew promises, the music overpowers everything else, a roar of sound that bills itself as a religious experience, that really Real that can, ultimately, only be found in Art.