Lone Wolf Tribe's Bride is that weird sort of wonderful that brings butterflies to the stomach and flashes of color to the eyes. Inventive, unique, and a superlative work of theater, Kevin Augustine's hybrid puppet/human epic is an intensely fascinating show. 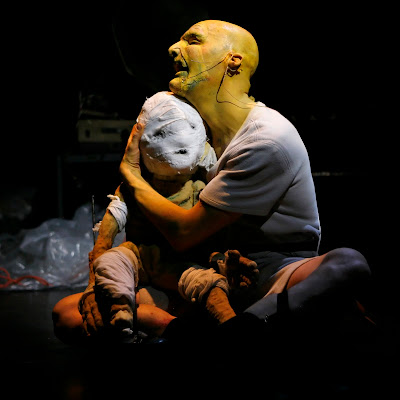 Yes, I'd marry this show. Lone Wolf Tribe's Bride is that weird sort of wonderful that brings butterflies to the stomach and flashes of color to the eyes. Inventive, unique, and a superlative work of theater, it is so intensely fascinating that one can imagine settling down with it for the long haul. Not that director Ken Berman, ever lets Kevin Augustine's show settle down: it begins with a floating head pushing itself against a plastic scrim, as if trying to pierce the barrier of some Asian horror flick, and ends in a giant goddess's embrace, pallid and veined, as if the monsters of Akira were drawn by R. Crumb. For the 85 minutes that span those moments, Bride is a macabre dance that fuses miniature puppets (Augustine) right out of Tim Burton's The Nightmare Before Christmas with a large set (Tom Lee) pockmarked with anachronistic terminals and gramophones straight from Terry Gilliam's brain.

In other words, Bride is a twisted, clever work of theater: the first thing Father (Kevin Augustine) does, after Monkey (Rob Lok) wakes him up, is to shoot himself. (You would too, with a switchboard full of backlogged prayers.) As comedy would have it, Monkey runs over to "The Book" (a sort of "best of" compilation of the Koran, Torah, and Bible) and, scanning it with a pen that reads the words aloud, reminds our definite antihero that he is, unfortunately for him, "everlasting." From there, He attempts to come up with a good idea, shaping bits of crumpled paper into the next messiah, a creation that, step by step, slowly grotesques into a child-sized puppet. (And by any definition, God is the original puppetmaster.)

Bride isn't exactly easy on religion; aside from the fact that Father seems to be senile, he's also a dessicated, yellowed figure walking around in a tattered bathrobe and garters. (Ana Marie Salamat's make-up is horrifyingly good, and Shima Ushiba's costumes are just real enough to help us imagine ourselves in His position.) Nor is it forgiving to mythology: Father is the one and only god because he's killed all the others, and those bits about "salvation" and forging "a covenant of peace" have conveniently been charred out of his Book. It isn't even kind to him as a person: he isn't a kind Father -- he's prone to zapping Monkey with what little energy he has left -- and he cruelly pushes his son (literally twisting him in half when he becomes the puppeteer) to complete a dance that's symbolic of a crucifixion or passion play.

For all this darkness, Bride remains a stark and beautiful work of art. As Father imagines his perfection, James Graber appears, flawlessly dancing what the crusty puppet can only gawk in wonder at. (And yes, these puppets can gawk -- with haunting familiarity.) Later, as the son imagines what his father has in store for him, he plunges deep into the skeleton-strewn depths of hell, walking through smoke and and over white bones as he looks at all the dreams that have not just died, but been chewed to death by red-eyed rats. (Beauty exists even in nightmares.) All that's saying nothing of the puppeteers themselves (Lindsey Briggs, Jamie Moore, Jessica Scott, Alissa Hunnicutt, Frankie Cordero), ninja-clad stealth artists who make more of the play by making less of themselves.

What's most astonishing is that, despite using puppets, there is nothing small about this show. (Hell, there's even a fully discordant band, led by Andrea La Rose and featuring soprano Rachel Carter White.) From the epic plot to the full use of P122's wide upstairs space, Bride features a larger-than-life atmosphere that is filled with beauty, surprise, and heart-thudding creativity. So yes, I do; I wouldn't have my plays any other way.