The Exchange attempts to reconnect to traditional horror by riffing on classic tales like "The Monkey's Paw," but what's lost in translation is relevance. The Scariest fails to leave any impact on the audience and is, at best, cute. 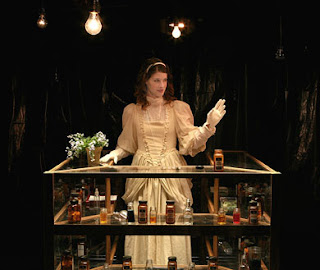 What is horror? What is it to be scared? In our modern world of desensitized gorefest movies, we’ve forgotten that the horror genre claims its roots in thought. Scaring someone is just a continuation of the Greek principals of drama—shocking you into catharsis. Giving you a guiding pathos. In this way, horror is very relevant to how we live our lives. Good horror should make us think about our lives, and our selves. The Scariest, a collection of horror scenes from The Exchange (formerly The Jean Cocteau Repertory Company), attempts to reconnect with this traditional idea of horror by presenting pieces based off some of the classic horror stories of all time (W.W. Jacobs's’ “The Monkey’s Paw” and Nathaniel Hawthorne’s “Rappaccini’s Daughter” for example) together with contemporary pieces. What’s lost, however, is relevancy. The show fails to leave any impact on the audience and is, at best, cute.

The ensemble cast is technically proficient, but doesn’t move the audience. The exceptions are Angel Desai, who plays a wide variety of characters with feeling, and Andy Grotelueschen, who showed some passion in an adaptation of “Monkey’s Paw”—the second of two adaptations. But precision from your actors without passion is far from The Scariest and the audience is never frightened.

For some reason, none of the playwrights could develop a play without the use of directly addressing the audience—a contemporary theatre cliché which comes off as amateurish. The Scariest consists of plays commissioned just for this show, and to that I say yikes! because made-for plays tend to not have that long-lasting freshness that makes viewers care. I was right. The scenes mostly rehash very familiar material. There are nine plays in total, and four of the playwrights have conspired to include a Rod Serling look alike who tells us “scaaary stories.” Two adaptations of “The Monkey’s Paw” teach us to “be careful what you wish for.” We can’t possibly be moved by things we’re so tired of.

But at times there are small perks of personality to this impossible task. Laura Schellhardt’s play “The Apothecary’s Daughter” (inspired by Hawthorne’s “Rappaccini’s Daughter”) brings a lot of over-the-top humor to a period piece with the array of poisoned lovers who, “not so much perish as pass out," even though a father who talks from behind a screen (like the teacher from Peanuts) can be too much. Even one of the Serling plays, “Lobster Boy,” has potential because of characters dealing with pain reception, boxing on a swimming pool cover, and Powerpoint presentations, but it would have been better received if those characters were actually on stage. The best of the lot, by far, is the most personal—Kristin Newbom’s play based off The Book of Revelations (which only sounds like an artsy cliché, but it’s not). Her play is a zany opera of Johnny Cash music, the playwright “bod-casting” into multiple puppet bodies, the two witnesses (from Revelations), and a Tom Cruise lecture on scientology that makes it relevant for the contemporary audience. I hope that Newbom takes this idea further because “Revelations” is a very compelling in its zaniness.

The real asset of this show is its design. Clint Ramos’s set, a weathered gangplank in the shape of a cross, really makes use of the space, allowing actors to enter from all sides of the audience. Plus, the plastic sheet walls add to the creepy industrial effect and allow Christopher Studley to project silhouettes of actors in his toying with shadows. Lindsay Jones’s sound was like cheesy Japanese anime but other than that, the production vales add to the experience of this show.

The Exchange is “committed to creating theatrical classics of the future.” The Scariest does not, by any stretch, meet that goal. This show will not last beyond this moment in time, so if you would like to chuckle over some classic horror head down to The Green Room.