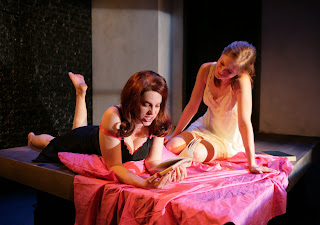 Perhaps my expectations were too high, but in sitting in 37 Arts’ large theater, while watching what is clearly a solid, well put together production, I couldn’t help but be underwhelmed.

When Beebo Brinker Chronicles played in a small theater off-off Broadway, the buzz was big. Word-of-mouth, and the reviews, were positive. I was bummed to not have made it to the show, and mentally stuck it into that category of “shows I wish I had seen.” So when the announcement came that Beebo Brinker Chronicles would begin an off-Broadway run, I knew I’d have to go.

Perhaps my expectations were too high, but in sitting in 37 Arts’ large theater, while watching what is clearly a solid, well put together production, I couldn’t help but be underwhelmed. Perhaps the large theater swallowed up much of the show’s charm, which very well may have been connected to the gritty, intimate nature of a small village theater (especially with the show’s setting primarily being the West Village).

Based on lesbian pulp romance novels by Ann Bannon in the 1950s and 60s, Beebo Brinker Chronicles is a dramatized variation on the themes of a few of Bannon’s books. Beebo Brinker herself (played with a knowing smile by Jenn Collela) is the butch woman of female fantasy – she conforms more to male gender roles than female, taking the lead with the women she pursues, and dressing and acting accordingly. The play follows two women who were sorority sisters, and more significantly, each other’s first loves, through a decade of their lives. Beth (nicely played by Autumn Dornfeld) goes the way of housewife in California, but she is miserable, and loses interest in her husband. Laura, on the other hand (played by the immensely talented Marin Ireland, who is just a bit too over-the-top here), moves to the West Village in Manhattan. Though societal pressures keep her from being proud and comfortable with her choices, she soon finds herself living with Beebo, and a part of the gay community.

Kate Moira Ryan and Linda S. Chapman’s script is sharp – contrasting the subversive sexual content with that Golden-Age-like hokey dialogue. And Leigh Silverman’s direction is consistent, keeping the story moving along, while also maintaining dramatic tension. Yet this production just doesn’t pop. It coasts along smartly, but ultimately comes across as a fairly mild, well-made production. Beebo Brinker Chronicles is most strongly a reminder that theater is live – who knows, I may have felt that “pop” in the off-off production.
Posted by Amanda Cooper at 3/12/2008 12:09:00 AM

I saw both productions, and yes, the show was more intimate and gritty at Fourth Street theatre. But, the Off-B'way production offers a new life to the show and even, dare I say it, legitimacy. There's something to be said for having a show about 1950's lesbian pulp novels off-broadway. Who knows maybe Broadway's next??

I'd love to know what you find more legitimate about this go-round, compared with the last. I very much doubt it has legs for Broadway. But I did think that about In The Heights when I saw it in that very same complex, and now look where that fluffy show is.

Beebo Brinker probably doesn't have broadway hopes- but I could definitely see this as a movie or tv series. Kinda like a 1950s L-Word. The books are ripe with sub plots and enough vignettes to make the beginnings of a series. Someone just needs to step up...Lily Tomlin perhaps? producer of the Off-Broadway production? Just a thought, Lily... (call me if you need a PA ;P