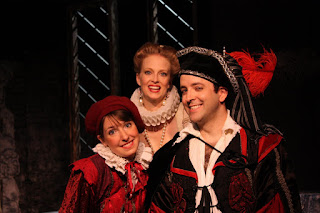 "If music be the food of love, play on," opens William Shakespeare’s classic tale of courtship and cross-dressing, and Judith Jarosz’s new production of Twelfth Night takes this behest literally, with a needless exotic twist. Loud Middle Eastern instrumentals play intermittently throughout the show, nearly drowning out the actors’ speeches. This is a shame because the vibrant cast delivers the Shakespearean lines faithfully and with classic inflection. Besides the substitution of Moroccan airs for the traditional Renaissance music and Arabian inlays to the Elizabethan costumes, the production is quite traditional—and that’s not a bad thing. With Shakespeare’s immortal words rendered by an accomplished cast, the exotic trimmings prove superfluous.

The production opens with a shipwrecked Viola (a vivacious Elizabeth Kensek), fearing her brother is drowned, and deciding to make her way in this foreign land by assuming a masculine guise in order to serve Illyria’s ruler, Duke Orsino. Disguised as "Cesario," Viola is charged with delivering the lovelorn Orsino’s proposals to the unwilling object of his affections, Countess Olivia (a radiant Annalisa Loeffler). The production comes alive as Viola falls for Orsino and Olivia becomes smitten with Cesario, both actresses breathing comedy into this merry love chase, which soon includes a fourth party—Viola’s unwitting brother, Sebastian. There’s also the subplot of a rascally trick played on the pompous steward, Malvolio, by the drunken idlers, Sir Toby Belch and Sir Andrew Aguecheek, and the "wise fool" Feste (an energetic Andrew Clateman). This roguish revenge scheme is also driven forward delightfully by a woman; Olivia’s servant, Maria (a lusty, shrewd Lynn Marie Macy). The men of the cast happily chew the scenery and engage in plenty of lighthearted swordplay and capers—but they can’t match the ladies in subtlety and wit.

Ernest Mier and Giles and Leslie Hogya present an elaborate stage with clever set pieces; perfect for the many intrigues behind hedges and fruitless pursuits required before all the entangled loves and plots come right. On the other hand, the Moroccan tinge to Deborah Wright Houston’s sumptuous costuming is a feast for the eyes but otherwise adds little to the production. The strength of Twelfth Night remains in the text and the actresses’ ability to tease out its inherently playful, exuberant spirit.