Creation Production Company's Man-Made is a play full of ideas that never quite make the leap from being interesting to being thought-provoking. You could certainly find a worse collection of characters -- fictional and real -- with whom to discuss evolution and man's hand in the process: Charles Darwin, his wife, his fellow scientist and rival Alfred Russel Wallace, Wallace's assistant, Mary Shelley, her creature (aka Frankenstein's monster), and the first completely bio-engineered woman: Eugenie Doe. But sagging under the weight of a slow beginning, even well-acted characters may not be able to do more than talk at one another. 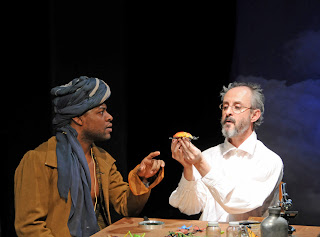 Man-Made opens with the competition between Charles Darwin and Alfred Russel Wallace—a lesser-known naturalist whose independently derived theory of evolution pushed Darwin to speed up the publication of his magnum opus: On the Origin of the Species. But from the moment Mary Shelley enters the picture (about halfway in)—greeted by Darwin with the paradoxical, “But you can’t be Mrs. Shelley. Mrs. Shelley died seven years ago”—the story shifts into an absurdist exploration of evolution. The characters navigate evolution’s intersection (often more of a head-on collision) with religion and ethics. History, fiction, and the future also forcibly collide in a dream landscape, but the conflict is oddly bloodless: there’s little tension built up to propel the story, but a lot of stagnant arguing between the characters.

Despite the somewhat muddled script, the characters come to vivid life. Notably, perky Mary Shelley (Kate Hall) and her extremely tall and imposing Creature (Bryant Bradshaw) shake up the bickering scientists when they enter and demand that Darwin and Wallace finish Frankenstein’s work by creating a mate for the Creature. Perhaps one of the more intriguing characters is Darwin’s wife, Emma (Eva Patton), giving voice to a figure who would otherwise be only a historical footnote.

Against the set of giant flowers and a projection screen shaped like half a globe (or perhaps the prow of a ship), the play doesn't hit its stride until its final scenes. That’s when the overly mannered stage directions stopped jarring and starting gelling with the action on stage, when situational humor started being on target. The production is playful, but such playfulness misses the opportunity for profundity. Darwin’s struggles against the Church could be rich dramatic fodder, but they felt tedious, as did the issue of a completely bio-engineered human who reproduces by cloning. (In 2007, researchers found it was possible to use bone marrow stem cells to create an immature sperm cell. The tests were conducted on male tissue, suggesting it’s possible to create sperm cells from females: that sometime in the future, women may be able to reproduce and preserve genetic variety without any genetic input from males; a possibility that perhaps should be even more threatening to males than the concept of endless female clones seems to be to Man-Made’s Darwin.)

I promise I am not spoiling or detracting from the story by saying the play ends with Mary Shelley returning to her writing desk to pen The Last Man, a later work of hers which features the few survivors of a post-apocalyptic world. The piece’s bleak theme is generally attributed to Shelley’s loss of most of her intimate circle of friends and family: it seems quite odd to suggest instead that it stemmed from Shelley’s response to evolution. But that is one minor point in a play full of ideas that do not quite make the leap from interesting to thought-provoking.