A father and son are trapped on a rooftop in the aftermath of Hurricane Katrina. There are comical and touching moments and good chemistry between the leads, but few signs of distress from the actors. And there are too many relaxed moments and jokes for there to be any sense of peril for the audience. A long discourse into gang life and a predictable plot takes precedence over any political, economic, or emotional stance that this production could have taken: the show isn't rooted in Katrina. As a result, Lower Ninth could have taken place almost anywhere, and that's a real disaster. 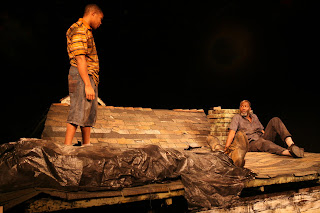 The spirits of the characters are strong in Beau Willimon's Lower Ninth. There's the rebellious spirit of E-Z (Friday Night Lights's Gaius Charles), who shakes his fist at God, and the supplicant spirit of his estranged father, Malcolm (James McDaniel), who stretches out his palm to God. Malcolm delivers a funeral service while E-Z responds with wisecracks and annoyance as they gaze upon the body of Lowboy (The Wire's Gbenga Akinnagbe, playing a role similar to the one on the show), a feared gangster in the neighborhood who has recently drowned during Hurricane Katrina. But despite the circumstances, the atmosphere is not one of doom or even of discomfort. There's simply too much harmless bickering and joking to go around. And it goes on like this for quite a while before there's even a mention of the flood below. For a production geared towards illustrating a desperate situation, this is not a good start.

During several rounds of "Guess who?" games and ribbing, we discover the circumstances by which Malcolm and E-Z came to be on this rooftop. The sturdy-looking "brick" set by Donyale Werle provides a logical escape from the flood. However, after we discover that Lowboy was already dead (dead or dying, since an unsuccessful attempt was made by E-Z to save him) before he was brought up to the rooftop, it does not provide a logical reason why a young man and his aging father would drag dead weight up a roof. In fact, it looks impossible since there are no visible ladders or anything except for shingles to grab onto. The human need to not let a body wash away is understandable, but here, the practical need is missing. Hunger, fatigue, and thirst are all conditions that would arise out of this situation, but very little of it is communicated by the cast. What we get instead is humor and banter. One good moment features an alternative to the Noah's Ark story that is imaginative, cultural, and boldly told in complete darkness, a choice that works to remind them and us of their situation. It's a necessary moment, since there are so few mentions of the hurricane.

Rather than focus on Hurricane Katrina, the script uses a formula that we have seen many times before. The script talks about the gangbanging, rather than the economic, ethnic, and socio-political factors at the root of this gangbanging. Granted, two people stuck on a roof for a few days are going to have trivial conversations some of the time, but Lower Ninth spends most of the play just pleasantly passing the time. During the time of this tragedy, there were newspaper headlines that encompassed the problems better than this play, and they needed to be succinct. Here, there are roughly 80 minutes to do that, but the premise barely touches on those subjects. There are expletives here and there that point towards President Bush and complaints of not having any money, but it's not nearly enough.

Also lacking are production elements that could assist in communicating the peril. Sound effects by BC DuBoff during scene changes are pensive and bluesy, but the mood of the cast does not match that because of the constant joking and petty disagreements. Because the flood could not be created onstage, sound effects such as raging waters, the crash of debris, or even a dog yelping in the water could help lock in their situation, but there is silence instead: Silence as a backdrop to conversations that are nothing but filler. The direction by Daniel Goldstein makes the cast sometimes appear as though they are having an adventure like the one E-Z describes from his past. He acts like an untouchable hero, climbing from one side of the roof to the other, with no danger of losing his footing on a dislodged shingle. When the scenes get violent between E-Z and Malcom, E-Z doesn't even look scared as his head hangs above the flood below. We know that E-Z can swim, but even a strong swimmer would have reservations about falling backwards in dangerous waters.

A couple of themes that E-Z does have reservations about are knowing for sure who has it worst and who is, in fact, in hell. These themes are exasperated by Lowboy's predictable rise from the dead during one of E-Z's sleep and thirst-deprived hallucinations. Here, the two converse about Lowboy's past and E-Z's future, and some wisdom is shared by Lowboy on both parts. Lowboy presents an afterlife that is peaceful, and seems to make E-Z's situation sound worse. However, Lowboy and Malcolm don't experience any hellish moments until the play nears the end. And by then, it's too late for the experience to be edifying or emotional.

Lower Ninth has a strong premise that it does not deliver on. If Willimon wants to enhance our understanding of the devastation in New Orleans that began in August 2005, then he needs to show us more. Spike Lee was able to express these horrors in his HBO documentary When the Levees Broke: A Requiem in Four Acts with still images of the scene and interviews that only talk about what happened. A stage drama should be able to at least approximate the same impact with an actual re-enactment of the ordeal. At this point, this one doesn't.