The must-see show of the 2008 FRIGID Festival, this double-bill of political one-acts features an avant-garde musical dinner party unlike anything you've seen before, paired up with an escalating, yet non-linear, conversation about the "ticking time bomb" scenario that questions the ethics of torture in one of the most hysterically frightening works of theater this year. 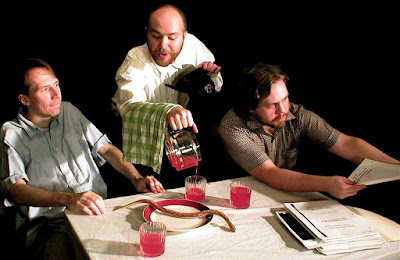 Water, pouring into a glass. The oh so delicate vibrations caused by a finger circling the glass's rim. A chair, shifting. Drumstick forks, banging on pans or scratching across the table. The sound of mastication. A harpsichord in distress, its strings cringing beneath a violin's bow. If that's not avant-garde enough, add in the garbled recitations of found text from the Army Prayer Manual, world news reports, and Rae Armantrout's poetry. If Chuck Mee and Philip Glass collided, they'd be lucky to come up with something half as good as Rick Burkhardt's Great Hymn of Thanksgiving, a self-titled "piece for three speaking percussionists." Beyond the creative effect of the work (and god only knows what the notation looks like), the play conjures up a hollow Thanksgiving, stripping away all the festivity of life, leaving behind only the artifice of objects clinking and clashing against one another. It also mocks our ability to celebrate such sham holidays, content in our safe little houses even as -- half a world away -- the radio broadcasts, in graphic details, the blackened and cooked corpses of innocent children.

That's not all; Mr. Burkhardt and his colleagues from The Nonsense Company (Ryan Higgins and Andy Gricevich) have a second act, Conversation Storm, which skewers our laughingly hypothetical conversations about torture. What starts out as (Scene 1) a play about Hugh's insomnia soon becomes actively rewritten (Scene 12) into a comedy (think David Greenspan's She Stoops To Comedy) and then (Scene 20?) a bitter extrapolation of "the ticking time-bomb scenario," which pits Hugh and Alec against one another in a game of moral onedownsmanship. None of this, incidentally, is really done in chronological order, so the nightmarish nuclear holocaust (Scene 41?) is there, as is its juxtaposition with a quickly pattered recitation of some very swanky menu options (Scene 17?), some literal torture (Scene ?), and more.

It's amazing how human all three actors are, given the machine-like precision of their shifts between scenes, not to mention the seamless break between the first and second play. This is, no disrespect to any of the other shows in the FRIGID Festival, the play to see.