A New York premiere of a farce by James Sheridan, this Heiress Production is being billed as a benefit for Miracle House. The play itself focuses on being a modern-day Moliere, a comedy of manners that is "a witty story of of the twists and turns of a multi-millionaire and the family members who hope to become his heir." Will money speak, both for the characters of the play and the producers of the show? Or will they find only cold hearts and icy stares? 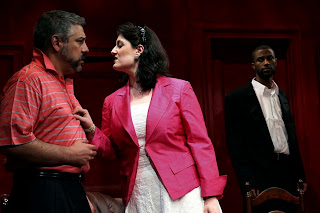 Affluenza is the “extreme materialism which is the impetus for accumulating wealth and for overconsumption of goods.” James Sherman diagnoses this cancer of The American Dream by satirizing it through farce. And in our contemporary world where seemingly all Americans think that fame and fortune are their birthright, this play should be a little contagious too.

The play takes place in a Chicago penthouse (distractingly painted red), and Sherman matches the text to the luxury by writing in verse. The script is a beautiful symphony of humor, canted by the sort of greedy people Moliere had fun with.

Affluenza is the story of a wealthy old man (William) and the people who want his money: his son, ex-wife, too-young-for-him girlfriend, and everyone else who comes into his Midas touch. The story is framed by Eugene (which sadly fits because Paul Herbig is a wooden actor) who has come to stay with his uncle so he can learn about real life. When he’s not being used as a bulletin board for his eBay addicted cousin Jerome (played by the very articulate Stephen Squibb) he mostly blends in with the furniture. Eugene’s failure as a framing device is a big problem because the audience can’t fully appreciate the comedy if they can’t see this as being morally ridiculous too.

Even with that there’s still an enjoyable silliness to the plot. Bernard the butler (Philipe D. Preston)—who also acts as William’s attorney, a preacher, and a rabbi—is trying to get Jerome and Eugene to be quiet, or get out. In comes the ex-wife, Ruth, who is so desperate for more plastic surgery that she is willing to throw herself into traffic to collect insurance money. Nancy Evans is delightful as the salty older woman but the character disappears for most of the play.

Unable to maintain order, Bernard finally has to wake the master, who is napping before his date with his young female friend, and the audience gets their first taste of William. Michael Saenz, who plays the master, is too young and strong to be playing a man who is expected to keel over and put out like a broken ATM: he sticks out as another sore thumb in the production. William’s girlfriend, Dawn, wins the audience over with her brilliant smile and non-Barbie doll appearance to the fact that she’s not out for money, until an impromptu marriage ceremony allows her to reveal that she is, in fact, a gold digger. (Mary Willis White still gets credit as a very original and capable choice, even though she produced the show as well.) And thus the characters start on a scheme to remove her from the household that has everyone running in and out of rooms and hiding behind curtains.

When you think of what makes a great farce, Affluenza falls short. The play is silly, no doubt about it, but in a form that’s known for being irrationally “all-out” the audience is left wanting more than this tame TV-condensed farce. The characters need more development and some of the jokes about the business world are so last year. This is not a perfect play but it is rhythmic and funny—the fact that I wanted more proves that. It is certainly enjoyable and should be at least as widespread as the malady for which it is named.