The Night of the Iguana

This well-directed but occasionally overacted revival of Tennessee Williams's The Night of the Iguana matches well with Reverend T. Lawrence Shannon's idea of "operating on the realistic level." The intimate space has been turned into an airy veranda, with audiences on three sides and gauzy, inviting hotel windows in the background, and director Terry Schreiber doesn't hesitate to play up the lush physicality. 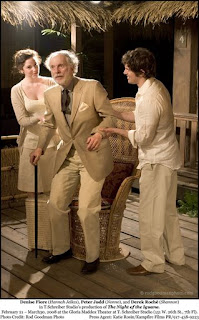 There's no confusion about what sort of Tennessee Williams play The Night of the Iguana is under Terry Schreiber's steady direction; from the first moments of thrusts and grunts, thinly veiled by the gauzy curtain of a rundown hotel room to the subsequent moments of quiet, mirthful dancing, it's clear that Mr. Schreiber is going to let Williams's physicality rule the day, and let the words follow. And follow they do: Reverend T. Lawrence Shannon sweats his way onto the stage, pursued by the girl he's screwed (Alecia Medley), her rigid protector (Pat Patterson), a wishy-washy bus driver (Ian Campbell Dunn), and the Creep, a miasmal presence that is leading him to his latest crackup, his next self-inflicted crucifixion (for which he has, you might say, a crucifixation). Water gushes out of a hand-pump, the Mexican pool boys (Armando Merlo and Guito Wingfield) jostle furniture around the veranda, and a group of German tourists noisily intrude whenever there's a moment's peace. (The play is set in 1940, though if the German presence is supposed to be political, it doesn't come across that way.) As the first act builds to a stormy climax, there's even strobe lightning and a downpour -- impressive (and again, very physical) staging for T. Schrieber Studio. If nothing else, The Night of the Iguana is at least operating on the realistic level, as Shannon might put it.

Madness thus established, Williams and Schrieber focus more closely on Shannon in the second act, particularly in his relation to Hannah Jelkes (Denise Flore), who is not just a fellow traveler or huckster, but a kindred soul, too. Maxine, recently widowed, would have Shannon by force, and she ties him to his restful hammock when he threatens to swim to China, but it's Hannah who sits beside him through the night, brewing poppy seed tea and speaking the plain truth, as calmly as possible, to Shannon about how one goes about coping with loneliness.

Both acts have their highs and lows -- Williams requires the same sort of endurance from the audience as he does of his characters -- but The Night of the Iguana is done great justice by its intimate, specific direction. As Maxine, Janet Sala hits the notes of both a dissatisfied nymph and of a desperate mother, and as Hannah, Denise Flore finds dignified grace and quiet sorrow. As for Shannon, it isn't until Derek Roche's tied to the hammock that he becomes more than the gesticulations of a wild man. For the last forty-five minutes, he's utterly captivating, moving from rage to sorrow to lethargy and then into a fugue-like depression.

Hannah advises Shannon to "accept whatever situation you cannot improve." But Terry Schreiber does her one better, and improves every situation that others might simply accept. The play is as genuinely funny as it is frustrating in the first act as Shannon squares off against all the demons, real and imagined, that besiege his innocent scamming. And in the quiet lulls of the second act, The Night of the Iguana finds a certain wide-eyed wondrousness in the eyes of characters stretched open by tears.