One Russian master tackles another, and shows us all how it’s done, in Classic Stage Company’s revival of The Seagull. 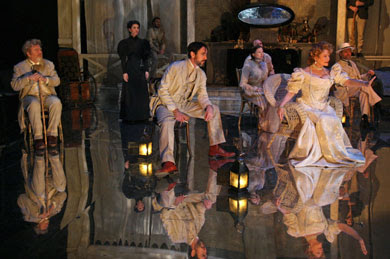 Photo/Joan Marcus
Reviewed by Jason Fitzgerald
(Note: Based on an early preview from 3/1.)

Long before there were movies and television shows to fill us with false expectations, there was the theater. As nineteenth-century audiences clamored for their seats at the latest melodrama or romantic vaudeville, they dreamed of exploits so full of passion, pathos, and heroism that their own lives felt dim in comparison. So it is appropriate that, in Classic Stage Company’s new production of The Seagull, a small theater—a simple wooden platform with two poles holding up a tattered brown curtain—becomes a focal point for this latest attempt at Chekhov’s first major drama, a play about the all-too-thin line between reality and possibility.
Everyone in The Seagull dreams of the impossible, including the four major characters—all of whom, not coincidentally, are artists. The radical young playwright Treplev seeks a sense of purpose (he has none), while the celebrity writer Trigorin fantasizes about giving up writing forever (he can’t). The aging diva Arkadina revels in her glory (which is fading), while young actress Nina pursues the same glamour for herself (a fantasia, as any working actor knows). After Treplev’s symbolist drama is greeted with jeers rather than applause, the stage on which it is performed becomes a symbol of an imperfect but sincere attempt at transcendence (specifically, through art). The small stage haunts each character and the production as a whole. Director Viacheslav Dolgachev, a former artistic director of the Moscow Art Theatre and currently head of Moscow’s New Art Theatre, keeps the theater on CSC’s own small stage for the entire performance. He uses transitions to push it around, often not to relocate it (it changes positions only slightly) but to bring it to our attention again and again. The smaller stage into which Treplev pours his own false hopes mirrors the larger stage on which every character seeks his or her own dream, however inaccessible.
Mirrors and magic underscore the entire production. Set designer Santo Loquasto covers the floor with a glassy, reflecting material that evokes the “magic lake” often referred to but never seen. An upstage porch, with lace curtains on either side, is the only stable structure in an otherwise fluid space, allowing Dolgachev to create clean, striking images that track the narrative journey. A large oval mirror upstage center provides another focal point, creating a sense of balance and fragile tranquility not disturbed until the final moment of the play. For this scene, when Treplev confronts Nina for the last time before ending his life, the lace is replaced by thick black curtains obscuring even the mirror. The final gunshot sounds like the breaking of glass, and indeed, when the curtains part, the mirror is cracked and broken, a correlative for the collapsed emotional ecosystem of the household.
In the same moment, Treplev’s mother Arkadina, played by Dianne Wiest, dips into a kind of madness, singing a high-pitched children’s song and creeping towards center stage, taking the rest of the cast with her, as though it is she who has cracked, along with the mirror, thanks to her impressive powers of denial. The moment is Dolgachev’s weakest—in trying to extend the trauma of the suicide to the entire household, he turns a moment of poignant devastation into ugly melodrama—but it culminates a well-calibrated performance by Wiest. The Oscar winner, who deserves credit for bringing both Dolgachev and Loquasto into the production (she was even involved in casting), turns the ethereal presence so quirky in Woody Allen’s films toward a character who walks on a self-made silver lining.

She is strongest, though, in the two giant third-act scenes for which her character is best remembered. In the first, as Arkadina and Treplev’s fragile relationship breaks down, Wiest’s performance is desperate, switching vocal registers and flailing about like a woman who has lost control. In the second scene, when Arkadina must win back her lover Trigorin, Wiest braces herself against a thick mahogany bartable before delivering a self-conscious performance right out of Arkadina’s bourgeois melodramas: “You’re the final page of my life story!” Here, Wiest stands tall and presents an Arkadina who is in control so long as she can find a script to perform. Though both scenes demand histrionics, Wiest skillfully contrasts emotional realism with performative melodrama, bridging the twin poles of the entire production: art and life.
Fortunately, in a play that denies the audience a central character (as opposed to the clear heroes and villains of melodrama), Wiest’s performance stands alongside a first-class ensemble. Alan Cumming’s Trigorin, is shifty, anxious, and uncomfortable in his own skin. He perennially wishes he were somewhere else, except when coyly seducing the young Nina. Ryan O’Nan’s Treplev has the right measure of youthful angst and unearned seriousness. You can take his struggle seriously, but not his pretensions.
Then there is Kelli Garner’s courageous performance of Nina—she makes her a kind of nymph, so breathlessly overcome by her own dreams she floats off the ground, moving on clouds as sincere as Arkadina’s are artificial. But Garner tempers her starstruck whimsy with indefatigable ambition. By the time she returns in the final scene, wearing a tattered seaweed-like blanket, boundless energy has become exhausted persistence. When she remembers the events of the previous acts with the reflection, “we were still children,” her honesty is as easy as her former idealism.
The rest of the cast is no less adept at creating richly detailed characters, from Marjan Neshat’s tragically earnest Masha to Annette O’Toole’s weepy Paulina. David Rasche’s Dorn is a religiously calming presence, but Rasche is careful to reveal the cracks in the doctor’s shell, proving that melodrama isn’t the only form of escapism.
Let’s face it—competent productions of Chekhov’s plays are hard to find in America. Classic Stage is fortunate to have a Seagull as intelligent, sensitive, and in tune with the playwright’s sensibilities as the one currently on its boards. Catch it while you can, before it flies away.
Posted by Jason Fitzgerald at 3/12/2008 02:05:00 AM