Brought to life by a practically flawless cast, Michael Murphy's The Conscientious Objector is both affecting and galvanizing. 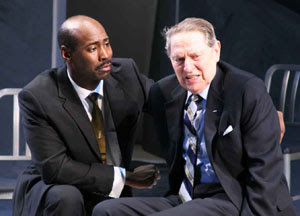 I was surprised to learn about Martin Luther King's transformation from peaceful civil rights activist to fiery anti-war orator during my freshman year of college, in a course specifically designed to unpack the politics of the movement. Knowledge of the events of his life that occurred between the March on Washington and his premature death seem to be rarely taught in American schools; I assume that most people would be surprised to learn that he was serving as a union agitator in Memphis at the time of his death. Luckily, playwright Michael Murphy has crafted a first-rate drama around King's struggle to break free from his image as a non-threatening black face acceptable to white America. Brought to life by a practically flawless cast, The Conscientious Objector is both affecting and galvanizing.

The play begins with Dr. King's (DB Woodside) indecision regarding a response to the burgeoning Vietnam War. Does his standing as a Nobel Peace laureate require him to become involved in the national peace movement? Will his coming out against the war injure his amiable relationship with President Lyndon Johnson (the extraordinary John Cullum), and, in turn, the bevy of civil rights legislation about to be introduced in congress? The words of his father reverberate in his head--"We [African Americans] serve to show that we are loyal Americans, we're worthy"--but he cannot shake the feeling that if the first generation of black men to have real opportunities are sent to die in Southeast Asia, a great deal of his work will have been for nothing.

Mr. Woodside, an actor primarily known for his television work, makes an assured and commanding New York debut in this challenging role. There isn't a false note to his performance. When King's initial subservience to President Johnson gives way to righteous opposition, Mr. Woodside is able to match Mr. Cullum--at seventy-eight, still a formidable opponent for any actor--blow for blow. The old addage that "behind every great man there's a great woman" is brought to life in the performance of Rachel Leslie, as Coretta Scott King. Ms. Leslie is able to communicate the profound impact that Mrs. King's moral compass had on her husband's decision to become more than just a myopic civil rights leader. From the large cast--of which Jonathan Hogan is another particular standout, in a host of small but pivotal roles--only Jimonn Cole, as the almost militant anti-war activist James Bevel, falls into the trap of fire-and-brimstone caricature.

As with his first play, Sin (A Cardinal Deposed), Mr. Murphy has culled a good deal of his dialogue from the public records of actual situations. It is a testament to his skill as a writer that his scenes never feel like walking and talking history lessons. (A note in the handbill makes the distinction that some moments were invented by the author for dramatic purposes) Carl Forsman, his frequent directorial collaborator, paces the drama with a fluid hand, and the action moves smoothly to a shattering climax. F. Scott Fitzgerald's famously glib statement that "there are no second acts in American lives" has become a cliche often disproved, and I can think of no better example than Martin Luther King. The Conscientious Objector shows that, with the benefit of time, we are able to recognize that some second acts are as equally rewarding as what came before.