A lot of so-called mature plays out there just talk about how awful life is and lapse into theatrical tricks when it comes down to showing the gritty truth. Simon Farquhar's Rainbow Kiss doesn't pull any tricks, just like it doesn't pull any punches: this is the year's most jolting play. With exceptionally physical direction from a fearless Will Frears and outstanding performances from the cast, most notably the anti-heroic Peter Scanavino, Rainbow Kiss is a must-see play. 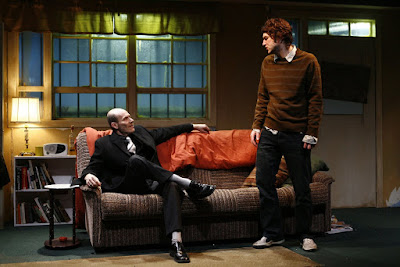 Part your lips, stick your tongue out, and take a deep breath, because Rainbow Kiss is, hands down, the most jolting play this year. As unsettlingly angry as any of Martin McDonagh's plays (only without the farce) and as comically tragic as anything from Conor McPherson (without the mysticism), Simon Farquhar's first play is messy only in its Scottish slang and depiction of life: it takes the best of Abby Spalleen's (Pumpgirl) grimy poetics ("I'd piss barbed wire to see her again"), the rhythmic cursing of Mark O'Rowe (Terminus), and the dissonant energy of the Play Company's last playwright, Robert Farquhar (Bad Jazz), and puts them all to shame. Will Frears, with his intensely physical direction, gives legs to this bleak world, and his outstanding casts uses those legs to run down the audience (I still shiver thinking about Scobie's entrance).

The play opens with sloppiness of life: Keith (Peter Scanavino) fumbles with the keys to his flat as he tries to get Shazza (Charlotte Parry) into his apartment and into his pants. His apartment is dark, the wallpaper has cracked, and trash hangs from the doorknob, but for a while, in the reckless flush of whiskey and the carefree flicker of pot, all that fades away, and all that empty clutter is kept at bay. It can't last, and the rest of the play teeters on the verge of that first orgasm, with Keith trying to hold on for one more second, only to find himself losing it, always losing it. Keith, like his neighbor and best friend Murdo (Robert Hogan), is a good loon, but when it comes down to it, he's just a "spare prick at an orgy" who is perpetually told -- not even harshly, but nicely, easily -- to just fuck off. Sitting alone, taking his medication, and looking after his baby, he's just dying, slowly.

It's no surprise, then, that Keith and Murdo often consider suicide. (They've jokily labeled the veranda of their slum a "suicide suite," one that's all set with a "ready-made escape route if the pressures a high-rise living get too much." As Keith says: "That's the thing about living so high up. The only direction you can head for is down.") Their jobs are shite -- Keith works a literally dead-end job in Directory Enquiries ("You just find the number and press a button and the computer reads it out ti them"), and Murdo has just lost his job as a seasonal Santa ("I told a kid ti fuck off") -- and so is their neighborhood: fourteen-year-old drug dealers freeze to death on the streets, seven-year-old prostitutes offer blow jobs for fivers, and the coppers are too frightened of the crime to come around. Shazza is Keith's last hope: he has even mortgaged his present to a loan shark, Scobie (Michael Cates), for a shot at her in his future.

What makes Rainbow Kiss so powerful, though, is that it's not all talk. Keith doesn't just tell Murdo that he canna cope on his own; we can see it in the play. Each scene is another nail in his coffin, each blow worse and more desperate than the last. Will Frears piles on the disasters, unrelenting in his pace (there's even a gloomy presence to the scene changes), but it's Mr. Scanavino, as Keith, who sells the play. It would be all too easy for him to emote his way into melodrama, but instead, he twists and turns, running headlong from lust to love to panic to fear: a man drowning in needs, trying desperately to stay afloat with his futile actions.

I would nae change a thing in Simon Farquhar's play: the repetition of scenes and themes fit Keith's redundant life, and the dialogue is so punishingly good that I'd be more than happy to listen to more. (Not enough people thank the dialect coach, but Stephen Gabis deserves notice.) This is a mature, intelligent, realistic play that puts Farquhar at the top of his game . . . but don't think for a minute that he's playing around.