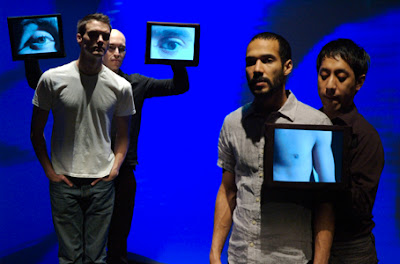 Never before have I seen a play that manages so well to walk the jagged line between passion and violence. Why then must RUS(H) spend so much time drifting, not walking, sluggishly floating complex philosophical thoughts about sexuality and the soul's unclenched needs? At times, James Scruggs achieves a beauteous balance between his text and image, as when Rus (Luis Vega) recalls, in a flash of video screens puppeted around him, how he hit Sonny (Lathrop Walker) with a car. At others, disconnected images of jail corridors, shadowy figures, and oversized tape machines lend a pretentious air of gravitas to words that, on their own, would be more than enough. As the characters often ask, "I'm not bad. Aren't I enough?" I'm sure the script would ask the same of its creator if it weren't so often overwhelmed by the video.

Luckily, Scruggs and director Kristin Marting have given some legs to all the heady thoughts floating around out there: the play pulses to a Latin beat and the silent tangos reveal more about the dissolving relationship between Rus and his wife, Sireene (chandra thomas), than their lies do. And on the other side of Anabella Lenzu's choreography is Qui Nguyen, doing his darkest, most grown-up fight choreography. He brings a modern gladiator aesthetic to the simmering homo-erotic tension between Sonny -- whose overexposure to Tina (crystal meth) has dimmed his ability to feel pleasure (the dramaturg calls him an anhedonist) -- and Rus, who is so haunted by what seems to him as routine that he longs for uncharted territories. Additionally, many of the images take on lives of their own: four LCD screens are manipulated by 'video puppeteers' (Marc Bovino, Dax Valdes) who fragment, overlap, and meld their screens around or to the actor's bodies.

Even still, the play seems strangled by its own conventions: the strongest moments either relegate the images to a simple screen-saver background of over-magnified leaves, or abandon the shtick altogether, as when Mr. Walker -- by far the creepiest and most compelling part of RUS(H), with his empty eyes and menacing glare -- pleads with the audience to share some Tina, drawing uncomfortably (or too comfortably) near. (It's a poor -- and awkward -- choice when Mrs. thomas directly addresses us later.) These are moments of pure chemistry; some of the others, as Rus forlornly reflects, are chemical: pure artifice.

RUS(H) is perhaps too daring, then, for its own good: it overdoses on technology. But the side-effects are dark and captivating, and though the show isn't quite a rush, it's one hell of a bender.

hi aaron, you made no comment on the music or composer. what did you think of it?

Well, I did mention that the play pulses to the beat of the Latin music, specifically during those long, luxuriant dream-dances. But -- and no disrespect to the composer -- my attention was not drawn to the background music, which is why I mention so little about it. I guess you could say it was seamless integrated into the show; it was successfully ambient.