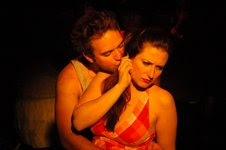 Ryan Nicholoff and Dena Kology in Woyzeck
Photo by Emily Owens PR
Reviewed by Cindy Pierre
[See also: Jason Fitzgerald's review]
Many liberties are taken in Counting Squares Theatre's production of Woyzeck, but most of them are not for the best. In this version of Buchner's work, the setting has moved from Germany to Iraq and the Midwest. But things start to get a little too creative: Woyzeck's (Ryan Nicholoff) madness, brought on by the damages of war, is represented by an Andrews Sisters-type trio that function more as harpies and burlesque performers than the harmony group that is known for entertaining troupes. These talented singers look like something out of a Tim Burton film (great costuming by Karen Walcott), but end up dominating the show so much that the wartime drama becomes a poor musical. Although the cast is full of spirit and energy, the show is oversexed and doesn't come close to the social commentary on poverty that the unfinished play intended (or, at least what analysts have concluded). Instead, it inserts inappropriate humor into serious circumstances, and turns chaos and confusion into hushed whispers that are echoed.

The production includes the original content about poverty—Woyzeck earns extra money for his unfaithful girlfriend, Marie (Dena Kology) and his illegitimate baby by taking part in medical experiments like living on an all-pea diet and performing menial tasks for his Captain (Aaron Kirkpatrick)—but these scenes don't have the impact that they should to get the audience to understand his plight. Even the theme of poor people lacking morals because of their poverty gets lost in the numerous song and dance numbers. And the murder scene, the climax of the show, falls flat due to poorly conceived staging by Joshua Chase Gold. Woyzeck may be marginally entertaining, but its relevance to Iraq and present economic issues such as rising gas prices is moot, beyond the notes on the playbill. Sometimes sticking to the meat of the script is better than getting carried away by the trimmings.