Despite excising the "lovely" bit from Joan Littlewood's 1963 Oh What a Lovely War, which inspired Jason Craig's latest mash-up, Peter Ksander's aesthetic design, Lisa Dove's quiet yet powerful rearrangements of WW1 standards, and Mallory Catlett's firm direction keep this production looking just fine. The rest is tangled, and increasingly muddled, working through Brechtian alientation, Craig's own fragmented poetics, and homages to the Marx Brothers and the Dadist Cabaret Voltaire, but fascinating all the same. 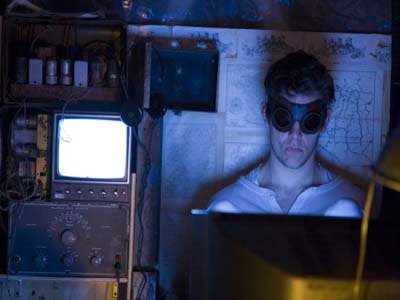 A twitch at first, and then a knotted-up tremor ripples across the face of Bunnich (Magin Schantz), a victim not only of the war she's fled but to the memories she's lost while submerged deep in the metaphoric hole of her new world. As she attempts to stomp out a stable rhythm, supported by her friends, a ragtag and anonymous group of deserters, she half-whispers a song, leaving out two simple words from J. P. Long's 1917 original: just like that, Joan Littlewood's 1963 play Oh What a Lovely War becomes Jason Craig's 2008 Oh What War, and while the clownish satire, the Brechtian juxtaposition of songs, and the projection of violent imagery remain, what a difference those missing words make.

There's been some scavenging to be sure, but in line with the mission statement of Juggernaut Theatre Company, everything old is new again: there's Lisa Dove quietly rearranging old songs so that they maintain their standard meter and style, but with added complexities and anguish; there's Peter Ksander, rigging a projector above a kid-sized pool of mud, so that the white-hot images of soldiers can ripple through it; there's Craig's complexly beautiful language ("I stared at the pea having just tickled me through and through / And then I screamed / And screaming brought rust blood / Six holes shooting streaming / I became my own comic relief as I imagined spinning and spraying like a sprinkler"). You can cite the Dada of Cabaret Voltaire all you like in the estranging vignettes of the so-called "Deserters," or the influence of the Marx Brothers during a privateering session ("There's not much business in stale, still peace"), but there's hardly a stale moment.

To that end, credit Mallory Catlett, who, as a long-time director of Craig's work, like The Fall and Rise of the Rising Fallen, can maintain his frenetic energy even when it is confined within a more dramatic, difficult, and down-tempo production. There is stage magic in the blurring radio remixes from G. Lucas Crane set to the trench crawling of shadowy figures who brush the ceiling, and in dances set in the mud and songs gasped through a cloud billowing smoke (hold the mustard). Her work with the cast is meticulous, too: Merz (Scott Sowers) alternates between Polish, German, Italian, and French (at least), an Everyman amalgamate that singlehandledly illustrates the underlying humanity (and comic timing) of every soldier, but he comes across so clearly that translations would be superfluous. Hennings (Kelli Rae Powell), a droll and melancholy host ("I created this lazy lethargy by lulling these fine foreign fools into this muddy boudoir"), seems a complete character after a single introductory monologue.

However, things start to get muddier toward the end of the play. Craig catches himself growing a bit repetitious, and so he switches from his nonlinear snippets into a cramped cabaret conclusion, and then pushes politics too hard with the ghostly image of the innocent Poster Boy (a talking head if there ever were one), a sort of exquisite corpse of the surgeon's design, turning on his creators, demanding that we look at what we have wrought. By turning away from the tremulous language and potent stories (Bunnich recounts a collection of bottles she found on the battlefield, each with a tooth and a dated paper with the word "sorry") and instead turning the bright lights on the audience, Oh What War flares out of focus.

In one of the earliest, and strongest scenes, Bunnich and Flooze (Jessica Jelliffe) present a slideshow on World War I, focusing on the comic doings of the Black Hand Gang. "They showed them," one will say, "Showed them what?" replies the other. In the words of one of those old-timey melodies, appropriated by (and appropriate to) the play, "Who could ask for anything more?" Because we can't explain war: we can only look at interpretations of it.