Workshop Theater's production of A Perfect Ganesh comes across as a thrift-store version of Terrance McNally's tale of self-discovery in India: experiences are often reduced to tacky, comic statements and all the vibrant exotic color is often reduced to a bland commercial hue. However, Peter Sylvester's direction, while slow, is actually suited to some of the self-satirical cultural tones, and the two leads, Charlotte Hampden and Ellen Barry, are bright enough spots that, every now and then, we can live vicariously through them. 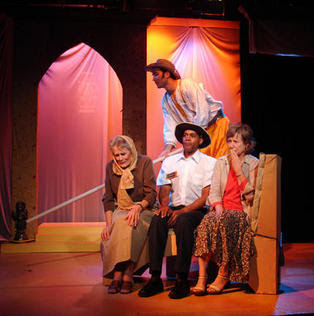 Workshop Theater's revival of Terrance McNally's A Perfect Ganesh doesn't need a muse of fire--the words are there, after all--but it could use a few more sparks to better kindle the genuine warmth flowing out of Katharine "Kitty" Brynne (Ellen Barry). No more aesthetics are needed: Kitty and Margaret Civil (Charlotte Hampden) are two quite ordinary friends with quiet mundane problems, and by keeping us focused on their reactions--the ways in which they change (or don't)--Peter Sylvester's basic staging benefits the play. After all, though there's one moment of catharsis beside the Ganges, the majority of revelations in this play are often subtle and internal.

But this is where that perfect energy is disrupted: while Hampden is able to get beyond a one-dimensional bitter civility, C. K. Allen and Gary Mahmoud often get bogged down in their accents, losing their characters to a repetitive series of mannerisms or loose comedy. It's not so much a problem for Mahmoud's Ganesha, who, as a monologuing narrator, doesn't hurt anyone by being a bland deity, but when he shuffles across the stage trying to be a petite, kimonoed Japanese woman, it's hard to see how Margaret can open up to that. Likewise for Mr. Allen, who takes the cultural punch out of the serving class characters he portrays: all those bitter anti-American feelings, which ought to be even more prescient today, come across as cheap, and easily dismissed, jokes. More importantly, Allen plays two gay men: one, the ghost of Kitty's dead, gay-bashed son, and two, a sick but optimistic man who has come, with his lover, to India--not expecting to be healed, but so as to really live. These roles are critical, as they give Kitty a chance to release the past and embrace the future, but Allen only hints at the deeper emotions beneath those feverish facades.

Luckily, the two female leads are very strong, and if the emphasis ends up on their own fractured friendship (it's astonishing how little we often know about our "closest" friends), so be it: secrets and confrontations make for good drama, too. They don't, however, hold our attention for the close-to-three-hours scope of A Perfect Ganesh: hopefully Sylvester will pick up the pace, even if he never manages to really fire things up.

2 hours and 20 minutes plus a 10 minute intermission.

Bear in mind that live performances have running times that are subject to change. I can only report on the length of the evening I attended, which began at 8:05 and ended at 10:50. As I mention in the review, the show was in dire need of having a faster pace: if you are not involved in the production, then I am glad to hear that Peter Sylvester has managed to pare down the run time.