Love and duplicity are in the air when a shady stranger convinces a man in love with his employer to let him assist in capturing her heart. Although this show is romantic and has good dialogue and performances, the road to romance doesn't always make sense and the decor and sound effects don't make the grade. 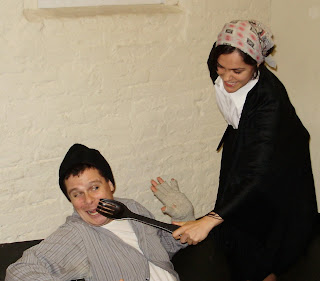 Many eastern churches prepare for Christmas day with a vigil that in the form of a mass or feast. In Vincent Marano's La Vigilia (The Vigil), noblewoman La Signora Avare (Victoria Bundonis) whips up a meal, but she forgoes waiting for Jesus in order to watch for the husband that abandoned her 20 years ago. Set in Florence (Firenze, to be exact), Italy, La Vigilia is a fable that has almost all of the ingredients to be successful: a romantic setting; a woman mourning her marriage; a servant, Onesto (Ridley Parson), long suffering in love and waiting to pick up the pieces; Ferra (Elka Rodriguez), a vivacious and impassioned woman anxious to soothe his aches; Zlo (Michael Black), a bumbling idiot that provides comic relief; and Sagesto (James Michael Armstrong), a wily, irresponsible vagrant who guarantees that posing as La Signora's husband will solve everyone's problems. What’s missing is a sense of logic in the plot or in the set pieces and sound effects meant to carry the audience to Italy.

In this production of La Vigilia, “Italy” consists of large, white background panels by Gabriella Willenz and Ien DeNio with illustrations of residents and buildings drawn on them. Although the pretty art looks good enough for a gallery, it's far from transportive. DeNio's sound effects, meant to evoke the buzz of townspeople at the market, sound more like the annoying buzz of flies. Luckily, there are other things to see and hear that are entertaining.

Marano's script is full of wise musings on love, snappy dialogue, and even some halfway raunchy lines that, in the mouths of this talented cast and under Kathleen O’Neill’s precise direction, aren't the least disconcerting. One bit that stands out is the interchanging of the term “boning” between two people and the “boning” of fish. The play on words is a stretch since the correct term is “deboning” for the fish, but because of the cultural differences, it's close enough to get a bunch of laughs. However, while the audience is enchanted by Bundonis' grace and Rodriguez' fiery but over-the-top performance, the outcomes surrounding the love rectangle are not realized in the most sensible way. Plus, any explanation as to how one person falls in love with the other gets glossed over. The ending, punctuated with unanswered questions, is also unsatisfying.

La Vigilia, produced jointly by Boo-Arts and Teatro Oscuro, is a fun and lighthearted comedy with a lot of good elements for success: witty dialogue, great actors, and romance. But not even the whirlwind of romance is strong enough to distract from the holes in the plot and the aesthetics. Until those things are addressed, perhaps we ought to hold a vigil for La Vigilia, waiting, in other words, for an even greater magic.