Plagiarism and politics are explored in this near flawless, aesthetically pleasing production about Shakespeare and his muses. 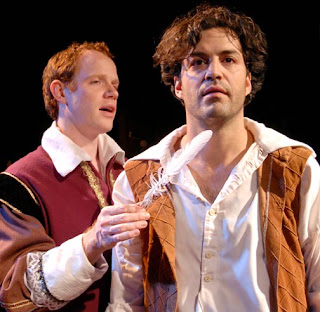 Robert Brustein's The English Channel is a riveting, fictitious account of how William Shakespeare borrowed from English poet and dramatist Christopher Marlowe and a handful of others to craft his own genius. Of course, that cat has been out of the bag for a long time now, but it’s never been suggested, even facetiously, that Marlowe gave Shakespeare his blessings to do so. Brustein takes liberties with both political and literary history by painting the Bard's story against the reign of Queen Elizabeth I, but it’s all for the best in this hilarious, vastly entertaining dramedy.

From the opening sequences where Marlowe, played majestically by Sean Dugan, appears with a bloody, eyeless socket, The English Channel never ceases to thrill. Having already suffered his brutal death by knife, he returns to tell the audience about the events that lead to his untimely demise. Those include practicing atheism, allegedly working as a spy for Queen Elizabeth I, and having homosexual encounters. His atheistic views go hand-in-hand with his spying and his writing, giving him a reason to watch the “wafer-eating” Mary Queen of Scots (who planned to overthrow Queen Elizabeth I) and fueling his politically bent plays and poetry. In his spare time, he holds court with his sometime lover and friend, Hal (Brian Robert Burns), the Third Earl of Southampton; Emilia Lanier (Lori Gardner), the Dark Lady of the Sonnets; and his poet-to-order, William Shakespeare (the temperate but true Stafford Clark-Price).

The historical “wallpaper” serves as a nice subplot to the production, but the focus is the process of creating art and the fear that originality may be dead. Rather than mourn the death of innovation, Brustein ridicules the practice of stealing and regurgitating, turning it into a laugh marathon. His script also supports his comfort with the borrowing, expressed best in a great scene in which Marlowe and Shakespeare engage in a suave improvisation, where Shakespeare re-enacts a series of scenes from his future plays that Marlowe slyly references. Brustein’s writing is frequently anti-woman and cynical but despite that, is wickedly charming.

In an excellent ensemble, Dugan, with an ever present undercurrent of humor in his resonant voice and Burns, with his infinitely watchable flamboyance and suppressed pangs of emotion (except in one instance where his anxiety shows in his trembling fingers) stand out. As a last-minute stand-in to Rosal Colon, Gardner does the best she can to not read from the script that she carries, but what she compensates for in enthusiasm and professionalism could not erase reality: “jet black hair, honest eyes, and olive skin” hath she not.

Luckily, Daniela Varon's fantastic, whimsical direction and Clark-Price's fight choreography ensure the authenticity of the rest of the visuals. Mike Billings’s set evokes a vast knowledge of England and its characters' legacies (through props, parchment paper, plumes, etc): even the ceiling of the small stage is adorned with some of Laura Crow’s spare but lavish costumes. It’s not just visuals, either: Scott Killian's soundtrack consists of great classical music sound bites that are edited in such a way that they support the tension and romance of the piece.

The English Channel may take place amidst plague, religious unrest and sexual escapades, but the show streamlines these fragments into a fun, compelling, and clever 85 minutes of nonstop entertainment. It’ll leave you wishing you could sail down the Channel for 85 more.