The costumes rule the kingdom in Nicu’s Spoon’s production of Elizabeth Rex, remounted for a four-week run at Off-Broadway’s Center Stage. It’s as though the production budget went entirely into costume designer Rien Schlecht’s pockets, and she has used it well, turning a play about power, gender, and performance into a play about clothes, which is to say she found a clarifying outlet for the whirling themes of the late Timothy Findley’s play. Add a pair of virtuosic performers to inhabit the two leads, and all that the rest of the company needs to do—along with the drab, hastily painted set—is stay out of the way. 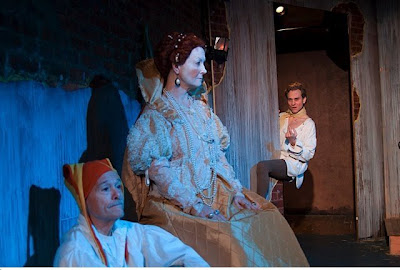 Elizabeth Rex imagines an evening—specifically, February 25th, 1601—when Elizabeth I chooses to wait out the execution of her lover, the treasonous Robert Devereux, in a barn inhabited by Shakespeare’s players. There, amidst the fracas of a company celebrating a performance of Much Ado About Nothing, she meets Ned Lowenscroft: sodomite, diva (he played Beatrice), and slowly fading victim of an unnamed venereal disease. After trading insults and wits, Elizabeth (Stephanie Barton-Farcas) and Lowenscroft (Michael DiGioia) strike a deal—he will teach the queen how to be a woman (and so grieve for Devereux), and she will teach Ned how to be a man (and so face death with dignity). They spend the rest of the play squirming toward their catharses.

Rather than dodge the gay-man-with-AIDS stereotype on which Ned is clearly based— anachronistic to the 17th century and outdated for the 21st—DiGioia reveals its enduring power. He earns the audience’s admiration for committing to the fey but lion-hearted victim who does not so much rage as swat against the dying of the light. Barton-Farcas doesn’t quite share DiGioia’s subtleties, and her preoccupation with the monarch’s accent and clipped tone makes it hard to catch her words, but she commands the stage and, with a glare that threatens to burn the barn down, earns the respect of her subjects on and off the set.

And yet—the production is really about the clothes. After a brief prologue delivered by an aging Will Shakespeare, the evening begins with a rush of gowns, hairpieces, bodices, stockings, tunics, bells, funny hats, and banners hastily removed and tossed about by actors. The unimpressive set, a mix of hastily painted grays, wood-colored wall posts, and chairs and tables that could have come from any theater’s prop closet, only focuses our attention onto the costume design, revealing an added layer to the power struggle between Ned and Elizabeth. That their costumes (the manly crown, the womanly garments) have taken their hearts captive is their power and their tragedy—for Ned, the power to speak freely to the queen and the cruelty of his slow death; for Elizabeth, the power to rule England and the resulting tragedy of sending her “Robin” to the ax.

While the rest of the actors easily shed their outer layers for plain white shirts, the two leads are more hesitant to remove their coverings. It is some time before we see Ned without his make-up (his open sores the only cosmetic he cannot remove), and even longer for Elizabeth to change into a less ostentatious outfit and—a theatrical triumph—to remove her wig. It doesn’t take a queen—or an actor—to empathize with their resistance to let go of surface identities and face the more complicated, and more fragile, truths within.

There’s little to say for the rest of the characters, or for the actors who—competently but not expertly directed—fade into the background with the set. The dying Shakespeare of the play’s outer frame seems more drunk than feeble, leaving a major aspect of Findley’s play—the recovery of the playwright’s memory and the closet-like pain of the secrets he’s kept—mostly unnoticed. Sammy Mena plays Ned’s pet bear with a dedication that underscores the humiliation of the task, especially since playing the creature sans costume makes no sense in a production so otherwise aware of its surfaces. What remains is essentially a two-character drama, a kaleidoscope of colors and fabrics, and a fine introduction to a lesser-known work.
Posted by Jason Fitzgerald at 9/11/2008 03:07:00 AM