This crude, shallowly imagined, frantically leaping, childishly portrayed new play of Edith Freni's is, without a doubt, Kidstuff. There's the rare sense of depth, buried deep down in Sarah Nina Hayon's quick retorts and self-denigrating attitude, but for the most part the play is too flat to even pretend that it's good. 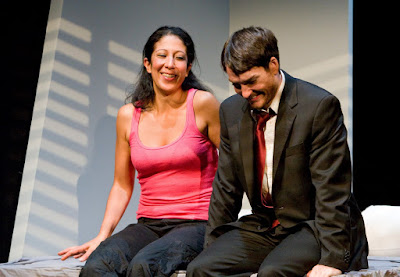 There's a little too much Kidstuff in Edith Freni's latest show. What starts as a lost soul's last chance--Eve (Sarah Nina Hayon) runs into her first love, Chet (Justin Blanchard) for a fifteen-year overdue reckoning--quickly turns into a bad comedy routine as her therapist, Lou (Peter O'Connor), has her fellow group members act out their interpretations of her unresolved conflict (Chet's affair). There are a few glimpses of depth, as Sarah (Sharon Freedman) co-opts Eve's story to work out her frustrated relationship with fellow patients Dave (Vincent Madero) and the diva-like Jemma (Cynthia Sylvia), but these are quickly flattened out by absurd actions (a fixation on cake); poor, overly coy dialogue ("Kindly remove your face from my face, please"); and a series of characters who are either crude (like a stereotypically Jewish shopkeeper and morally authoritative priest) or unexplainably shallow (like Eve's angry brother and carefree father).

Such exaggerated caricatures and situations make it hard to ever see Eve as a real person, even though Ms. Hayon does her best to remain level-headed. And there's something to the pace of the play, the way Erica Gould smoothly transitions between the last three months of Eve's life, that does, at times, get across the idea of a woman struggling to stay afloat in a distant and barely comprehensible world. But while Eve may be stuck in the past, rudderless, it makes little sense for the characters around her to be just as childish and lost: Lou abruptly demands that Eve beg him for help, Dave has a desire to play one of the female parts in their reinterpretations of Eve's past, and for some reason, a fourth "actor" is called in to provide another viewpoint for the group sessions--he doesn't, just like these moments utterly fail to shed any light on Eve's life. Even the play's ending is unnecessarily vague: after all that unrelated chaos, it turns out that Eve's had the solidity she craves--a sense of purpose and belonging--all along?

Partial Comfort Productions often end up as exaggerated urban tales, but they've never been so grossly comic, never so unfocused. The seams of this world's makebelieve are too visible, hastily stitched into an hour-long sketch, and they leave the audience with nothing to invest in. It also leaves us unable to even pretend that Kidstuff is a good play.