Slavery is wrong, period, a simple truth that will surprise no-one in the educated crowd at PS122. What will surprise them--especially given the emphatic and broad strokes of Thomas Bradshaw's writing--is how strongly the acknowledgment of such a vast moral wrong can still impact them. 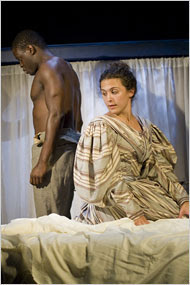 As Isaiah (Peter McCabe) lies on his deathbed, his wife, Beth (Lia Aprile), hesitates before promising to free his slaves, and in that moment, we see the hopes of married houseslaves Benjamin (Erwin E. A. Thomas) and Charlotte (Sadrina Johnson) go up in smoke. It's 19th century Virginia, after all, and as Beth explains to her abolitionist brother-in-law, David (Jeff Biehl), "There is no good reason to squander such property," especially when it would be a cruelty to release them into the wild. No, not with "so many good masters to take care of them," an opinion seconded by Beth's pastor brother, John (Hugh Sinclair), who understands that "kindness ruins these animals." Such broad, boldly contrasting statements, all spoken without the shred of remorse or awareness, degrade not only Benjamin and Charlotte, but the audience, which suffers vicariously through them. Hypocracy triumphs, for promises are apparently made to be broken, and since God loves everyone and works in mysterious ways, it's alright for people to hate niggers and work in greedy, selfish ways. (How things have changed . . .)

What's more effective, though far from shocking, is the physicality of the show, which introduces a sort of subtle explicitness that is expertly handled by director Jose Zayas and actors Thomas and Johnson. It is not so much the injustice of Beth forcing Benjamin to betray his wife for the sake of her own sexual fantasies as it is the look in Benjamin's eyes as he tries to clench back emotion and preserve his dignity, only to be betrayed by his body. The nudity of the body is not what is graphic: the naked emotions are what burn.

In this case, Bradshaw's choice not to develop his tormentors works: we aren't meant to sympathize. We're meant to see black and white--literally--and to deal with the fact that this heap of cruelties were not only meaningless to the perpetrators, but everyday occurrences. They're all secretly evil, too: David marries Beth, but not to free her slaves. Instead, he uses the false promise of freedom to fuck Charlotte, and repays her by selling her to another plantation. Despite his own affair, he vows to castrate and bury Benjamin alive as retribution for Beth's use of him.

Most graphic of all, Southern Promises is funny, squirming an uncomfortable laugh to the surface. The sheer offensiveness of what these villains say and do would be overwhelming otherwise, and so when Benjamin makes his escape in a 4' X 3' box, he is of course dropped several times by clumsy porters. To console Benjamin after his wife is sold, he is given a turkey leg and three small pieces of cornbread, one of which John steals. And then there's plain hypocracy, as when John and David pray for Beth's "poor nigger child" . . . who they have just suffocated.

Save for one misstep in which Benjamin dreams of being the master (which tarnishes his suffering), Southern Promises is a fine work of evocative theater. That it is not harder to watch says something more about the audience than it does about the highly capable cast and crew, who have created a lingering mood that sends aftershocks long after the curtain call.