Heaven in Your Pocket

A Kansas City nightclub, sassy singing ladies, cowboy boots, and Southern accents – who wouldn’t expect a rip roarin’ good time from this new musical, buoyantly titled Heaven in Your Pocket? But with its unremarkable story, mundane and mopey dialogue, and pseudo-country music, this show won’t do much to lift your spirits. 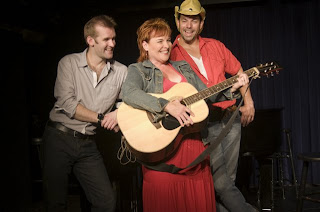 Stage right, a spotlit woman raises her dyed-red, mulleted head, and in an Oklahoman drawl invokes the metaphor of life as a road, whose unplanned detours can make the ride a little bumpy, but which eventually leads us where we were always meant to go. This Southwesterner is Arlene (Rebecca Spencer), a hardheaded single mom and country singer, prepping us for the story of her latest detour with her brassy best friend, Mary Celeste (Lisa Asher), and ingénue daughter, Kay Lee (Pheonix Vaughn), in tow. The three gals are natives of Heaven, OK, en route to a gig in Nashville, but who end up at a defunct Kansas City nightclub, willed to Kay Lee by her absent, and now deceased, father. Finding little besides the man’s most recent girlfriend and some tattered scenery, the tuneful trio swoop down on the ramshackle building and try to glam it up: it’s like To Wong Foo, Thanks for Everything, Julie Newmar, only without the drag queens.

The actors keep their accents thick and their energy high as they bustle about, one-liners like “I’d hate to end up on Oprah for the wrong reasons” and silly political references trying to keep the mood light. But with the characters' constant rehashing of the past and fretting over the future, especially via dialogue as fresh as a frozen burrito, there’s little to keep us optimistic or, for that matter, interested. Even the country music is missing its twang, taking a piano-heavy route that is more reliant on ballads than boot-stomping. Two lively scenes—one a campy, low-budget commercial shoot for the club and the other a doo-wop musical number that reveals sequins and scarves beneath choir robes—are like candy in contrast with the bland material; they’re not any more nutritious, but at least they have some flavor.

With affection for the Oklahoma town in mind, Barbara Kingsolver wrote Pigs in Heaven, and Three Dog Night wrote “Well I’ve never been to Heaven…”, but to hear it from Arlene, Mary Celeste, and Kay Lee, there’s nothing heavenly about it. Rather, it’s a Nowheresville speck on a map, a Podunk place people try to get away from or slink back to when they’re down on their luck. For the audience, Heaven in Your Pocket is about as meaningful as Heaven, OK: neither a celestial nor hellish experience, it’s something closer to Purgatory.