Compared to the fine wine of Steve Martin's last play, Picasso at the Lapin Agile, The Underpants is a six-pack of cheap beer, hastily chugged to numb the unhappiness of home life. Directed on high spin by Seth Soloway, this production manages--with the help of manic comic actors like Nat Cassidy and the sublime subtlety of Catia Ojeda--to iron out the kinks of the Carl Sternheim's underlying characters and get back to the wild and crazy puns of Martin's adaptation. 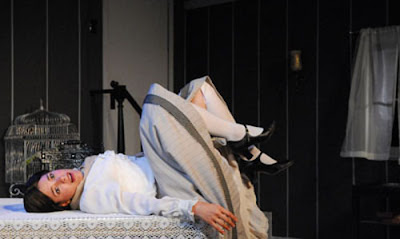 Steve Martin's certainly the right person to pun . . . ahem, pen . . . an adaptation of Carl Sternheim's 1911 social comedy, The Underpants: who better to, um . . . beat around the bush? The problem is that those frilly things are worn under a wardrobe of ordinary characters, stifling the more natural wit that burst out of every page of Martin's earlier play, Picasso at the Lapin Agile. No wonder, then, that Seth Soloway finds it necessary to put this Gallery Players production on high spin, overplaying the comedy in attempt to wring out the humor . . . an attempt that not only works, but, thanks to the stellar cast, irons out some of the kinks.

Picasso was a fine glass of wine toasting the artistic genius of our time; The Underpants is a six-pack of cheap beer hastily chugged to numb the unhappiness of our home life. Were the circumstances slightly different, Louise Maske (Catia Ojeda) could easily be Ibsen's Nora, but the comic tone is set when her husband, Theo (Justin Herfel) impotently criticizes her for her loose underpants, the scandalous sight of which--in broad daylight! at the King's parade!--have put his clerking job at risk. Martin throws in highbrow humor--"The whole event lasted two seconds," says Louise, to which Theo retorts, "Haven't you heard? Time is relative!"--but Soloway makes the right choice in speeding through these jokes, lumping them right in with the blunt innuendos of the farce that follow ("I'll slip in and out without you knowing," promises an adulterer).

As it turns out, the underpants have created a stir in this repressed 1910 German empire, and it's not long before two oglers/lodgers arrive: Versati (Nat Cassidy), a wildly liberal romantic poet, and Cohen (Jason Schuchman), a conservatively nebbish barber. Along with Theo's clockwork moralism, these men set the tone of the play, while Louise finds herself alternately liberated and frustrated by their advances, egged on by a nosy neighbor, Gertrude (Amy L. Smith). Again, Martin struggles to put his voice in Sternheim's characters, and though he trips over Cohen's bland attempts to hide his Jewishness (no fault of the very funny Schuchman), he wildly succeeds with Versati, a wild and crazy guy who is closer to his own heart (and apparently Cassidy's, for he steals every single scene).

According to Martin, the play symbolizes the clash between romance, jealousy, and fantasy, but those things are too lofty for the base material. Instead, Soloway plays it for laughs, and by shedding the bulky morals, he gets them, exposing the sheer side of Martin's Underpants in all their glory.