In Jon Fosse's familial drama, a surprise party is ruined after the guest of honor suffers a crippling stroke . . . but that's not going to stop the family from complaining! 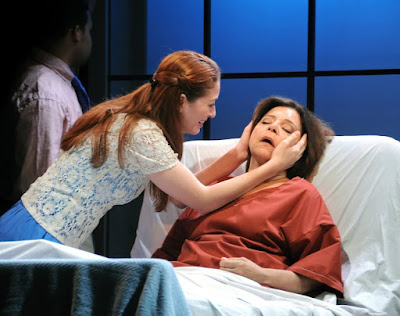 Sa Ka La, written by Norwegian playwright Jon Fosse, involves a surprise party of the most disturbing kind. Henning and his sister-in-law’s husband, Johannes, are setting up for their mother-in-law’s sixtieth birthday and wondering why the guest of honor is late. The shared sideways glances and grimaces the brothers use in place of language speak volumes about their complicated relationship with “Mom” (Kathryn Kates). It’s awkward, but rings true. Miles away (i.e., the other side of the stage), Nora (Marielle Heller) sits at the edge of a hospital bed, watching her comatose mother, the victim of a sudden stroke.

The contrast between the wisecracking Henning and Johannes and the startled pain in Nora’s eyes is enough to instill the fear of karma in even the snarkiest audience members: it calls for at least a brief moratorium on gossip. Like a little girl again, the ever-devoted daughter Nora begs her mother to hang on just a little longer, at least until her sister and brother Hilde (Birgit Huppuch) and Ola (Noel Joseph Allain) arrive. Nora’s pleading makes us hope that this tragic event will reunite the estranged family, but as Hilde’s high heels stomp into the room, her lips pressed into an angry, thin line, her eyes narrowed in barely concealed rage, those hopes are dashed. In this family, Mom’s stroke only enhances their tensions: how dare she disrupt the party to lay on her deathbed?

Sa Ka La effectively explores uncomfortable truths about family and tragedy, but its power is decreased by the staging. Director Sarah Cameron Sunde handles the sudden shifts between settings by having half the cast freeze, but then has them move into new positions in the middle of another, unrelated, scene. It’s like watching a two-ring emotional circus, and it dilutes the power of both Johannes and Hennings’ bonding even as their siblings unravel in the hospital. Fosse deserves credit for treading difficult familial waters, but Sunde’s staging reduces the power of his efforts.