Radiohole's latest piece, ANGER/NATION, literally goes balls out as it juxtaposes the life of the anti-drink anarchist, Carrie A. Nation, with the videos of occultist Kenneth Anger, the performance art of Eric Dyer, Scott Halvorsen Gillette, and Maggie Hoffman, and a sampled soundscape that vibrates through the free beer. Don't worry if you don't know any of those people: this show invents its own reality, so if you can let go, then go. 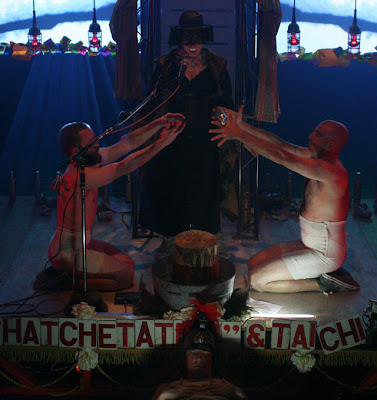 Before there was the lipsticked bulldog, Sarah Palin, there was another god-inspired bulldog, the importantly self-named Carrie A. Nation, who saw herself as "a bulldog running along at the feet of Jesus, barking at what He doesn't like." She's just enough of a lunatic legend to fit the profile for the acclaimed but very experimental group Radiohole, who juxtapose this thoroughly old-fashioned anti-drink anarchist with their own ultrachic hedonistic aesthetic, placing her not at Jesus's feet, but at "de" base of Kenneth Anger's dated film clips (a nice mix, since he was heavy into sex and the occult).

ANGER/NATION is performance art, meant to be actively experienced, which makes it difficult to talk specifically about the show. A hatchet is used, and not symbolically, as are two highly pressurized air rifles (though in this case, due to the high levels of pain, hopefully symbolically); Caesar makes a drunken appearance, as does a boobied President Taft: these should give you some idea of the ideas floating around Eric Dyer, Scott Halvorsen Gillette, and Maggie Hoffman's heads (and, I hope, within the latter's very pregnant belly). Between snippets of quoted text from Nation (Hoffman), who vampirishly drips blood from her lips, and contemporary dissonance from, say Karl Rove, samplings of sound swell through the theater, daringly loud, and Dyer and Gillette perform ritualized movements that extend well beyond comedy or drama.

They're also, at times, well beyond common sense, but this can be a very liberating thing: as freeing in one-dimension as Carrie believed her bar-smashing to be in another (releasing the souls of those poor drunkards from their addiction). It's hard to imagine what a Radiohole afterparty might be like: the audience is plied with booze from an onstage keg from the getgo, and both Dyer and Gillette (along with Iver Findlay) chug recognizable beers and oddly colored shots throughout the performance. ANGER/NATION feels like stumbling into the basement of a club, bass music still vibrating through the walls and seats, just in time to overhear the deep and drunken ramblings of the select few who truly believe they can alter reality.

Radiohole is a ballsy group (Gillette takes this literally), and their work is so original that it may be discomforting to those who have worked so hard to think inside a black box. Ironically, the calm anticlimax of the show (Zen Buddhism is referenced) is what actually made audience members walk out: no-one likes to hang out and cuddle after a good mindfuck. But every now and again, it's worth having your mind blown.