A former Nazi criminal turns tail and runs from life imprisonment in the Netherlands, becomes a Mennonite and starts a new life in Canada until a reporter discovers his whereabouts. Although there are some good performances and good moral questions, the staging is terrible and ultimately ruins the show. 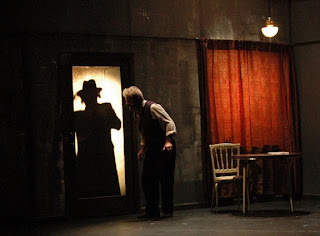 Richard Mawe in Refuge of Lies

Reviewed by Cindy Pierre
In Ron Reed's Refuge of Lies, Rudi (Richard Maw), a former Nazi collaborator turned peaceful Mennonite is found by Simon (Drew Dix), a reporter and descendant of Holocaust victims who is hell-bent on seeking justice for his family. (The story is loosely based on Jacob Luitjens, a member of the Landwacht [SS-appointed Dutch land guard] during World War II who avoided life imprisonment by escaping from the Netherlands to Paraguay and into anonymity after the war.) This Holocaust drama may not be set in Auschwitz, but it brings enough of Auschwitz to the stage, through visuals and circumstances, to ask you to decide over and over again between justice and grace. But while you're wincing over all the work you have to do, you'll wish that better choices were made to bring this potentially powerful story to life.
The show begins slowly in the midst of Rudi's new outwardly peaceful and mundane life with his wife Nettie (Lorraine Serabian) and friends Hannah (Joanne Joseph) and Conrad (Arthur Pellman), but Rudi's inner turmoil is also established early; a mysterious Hasidic Jew, carrying what appears to be a baby bundle, stands off in the dark as Rudi references speaks of a strange vision he had. This marks the first of many sightings of this man, but future appearances are accompanied by loud, rapping noises (illogically not made on the door) and an eerie sound clip by Josh Leibert that evokes science fiction, not drama.
We are first introduced to Simon as a narrator in both a visually and strategically awkward place, entering from an area that has already been established as the Vanderwaal household and after the plot has begun to unravel. His speech about Holocaust horrors runs long, is sensationalized, and is heavy with intentions that could have been dramatized in the action or omitted entirely. It also slows down the already sluggish start of the play. But both stage manager Amanda Gwin and director Steve Day are at fault for the staging problems; Day created them with messy direction and Gwin, as the eyes and ears of the show, failed to provide much of a warning.
The backstage is also too involved in the production. As the location of the various bathroom scenes (where Nettie, not Rudi, washes away her guilt for marrying a criminal) as well as where Rudi tends to his pigeons, it's a safe, hidden zone for the actors, but a frustrating one for the audience, which has to wonder what could have been left out or referred to in the dialogue instead. What’s more, these segues overlap, which leaves little time to digest the moral dilemmas.
The plot aims to communicate the difficulty of deciding between justice and mercy, but does so in such a flashy and relentless manner that it bludgeons them, and us, to death. Rudi's domineering father makes an appearance in two scenes to, in essence, remove some of the blame for Rudi's actions, but this weak strategy doesn't absolve him of guilt. Nor does Reed want to do so: guilt is Rudi’s constant struggle on the road to redemption. For that, he seeks comfort and solace in Pastor Jake's (John Knauss) advice, but when Jake administers communion to Rudi in the dark from a small vial hidden in a black box, it looks more like a drug deal than a sympathetic moment.
Refuge of Lies is not bereft of heart and sentiment, though. Serabian is wonderful as Nettie, showing great anguish over her husband's true identity and the imprisonment that he faces. She serves as an instrument of grace herself: in the span of a few minutes, she goes from distress over her husband's two identities to a passionate defense of him against Simon and his niece, Rachel (Libby Skala). Despite Skala’s exaggerated body movements and head-shaking (meant to show childish frustration), her character's unease with Simon's mission strikes a powerful balance between revenge and forgiveness. Although Mawe does a good job of portraying Rudi's unrest, Serabian is even more convincing in her turmoil.
Although Refuge of Lies repeatedly asks whether or not Rudi deserves to leave his sordid past behind, the opposing sides of justice and grace are not as deadlocked as perhaps the production intended to be. Reed clearly wants Rudi and Simon to be on equal moral ground, but guest appearances by Rudi's father, the support from his family and friends, and the greater stage time given to Rudi over Simon suggests that the empathy should lie with Rudi. And though there are good performances, they can't save the show from the distracting and detrimental staging issues. Lies don’t make much of a refuge, but the bulldozing presentation knocks the flimsy frame down altogether.
..................................................
Refuge of Lies (2hrs with intermission)
Lion Theater (410 West 42nd street, NY NY 10036)
Tickets: $18
Through September 28th.
Posted by Cindy Pierre at 9/23/2008 09:47:00 PM