When You Comin' Back, Red Ryder? 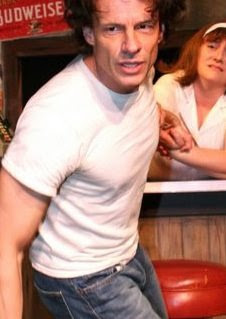 Teddy, a young former soldier, has a grudge against America. Since he can't punish an entire country, his anger finds a target in an unsuspecting diner. The crowd comes in for eggs, but ends up caught in a hostage crisis, casualties both of Teddy's dissapointment, and the society that created it.

Steven, aka Red (Ben Schnickle), can’t seem to relax after his graveyard shift at Foster’s Diner in New Mexico, in the revival of When You Comin' Back, Red Ryder? The relentlessly chipper attitude of his co-worker Angel (Heather E. Cunningham), who takes the morning shift, just makes things worse for this moody young man. Unfortunately, he can’t even really think about getting away on this slow Sunday morning, because a young army drifter named Teddy (Christopher Patrick Mullen) has decided to hold all the customers hostage. Mark Medoff writes about more than money, though: he shows that while Teddy’s actions are reprehensible, they are also a product of the cultural conflicts of America in the late 60s. It's this question that keeps the play from becoming mindless violcene. It’s not just a fight between Teddy and the diner patrons, but between generations and classes—in other words, between the fifties and the sixties.
Before Teddy’s entrance, the most exciting aspect of the play is the pitch-perfect set: a jukebox with flashing lights, faded chalkboards with specials that never change, Formica everything, and the clanking of dishes—you can almost smell the bacon and eggs cooking. As Red, Schnickle is suitably scowling and moody, but he never says exactly why he wants to leave so badly, so while all of his scowling and railing against his small town is meant to evoke sympathy in the audience, it comes off as needless whining. In their slacks and ties, violinist Clarisse (Matilda Szydagis) and her husband Richard (David Blais) look more like walking targets than actual people, though they become the former the minute Teddy walks in with Cheryl (Casandera M.J. Lollar) and a gun. Red's angst seems like the point of the play at first, but Teddy and his gun quickly take over, raging against both the diner, and the society it belongs to.
Is Teddy is legitimately railing against a society that forced him into the army, or simply taking the diner hostage for the hell of it, preying on the defenseless staff and customers just because he can? It's this question that makes the story intriguing, and despite the violence, impossible to look away from. It's challening the auidences sympathies-is it possible to empathize both with the helpless patrons, and with the seemingly evil man who is holding them hostage? Mullen's posture and swagger, along with leather jacket and haircut, make him resemble a less-pale Mick Jagger. Whatever his reasons, the more appalling he acts, the more impossible he is to ignore, whether that’s forcing the customers to dance together, stealing a violin, stripping his hostages, or shooting his victims.