The worst thing Into the Hazard has to worry about is a surfeit of riches. The presentation--particularly from the actors--is more than enough to balance out the stray haphazard modernization, or over-the-top flourish. Jessica Bauman has succeeded in making one of Shakespeare's slower histories, Henry V, into a dynamic show for today. 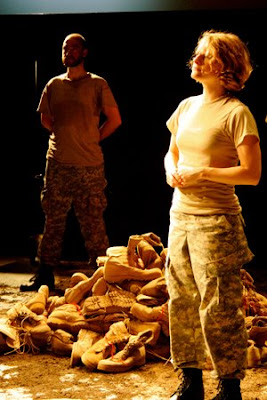 Jessica Bauman's adaptation Into the Hazard might as easily have been titled "Once More Unto the Breech." That's because, despite the multimedia dress-up, it's just an abridged adaptation of Shakespeare's Henry V, pentameter and all. The good news is, Bauman's show is "suffering" from a surfeit of riches. All the bells and whistles meant to contemporize the tale of a young and untried king being thrust into war are ultimately unnecessary--but they look pretty cool.

For instance, it may not add much to have King Henry address a camera instead of the audience when he marshalls his troops via an "address to the nation," but Austin Switser's excellent video design sure makes the faux programming from the History Channel and FOX News look believable. It doesn't really matter that Emily Pepper dresses the cast in suits, but it's a nice touch that after the intermission--as the war starts--everyone's wearing fatigues. (When's the last time you saw a "noble" or a "king" actually risk their life?) Finally, there's absolutely no need to reduce the cast to only six actors--except that they're all so good, and it's nice to see such range. The one visual image that Bauman uses to enhance the text is entirely nontechnical--an ever-growing mound of combat boots, plopped center-stage, helps us to see the casualities. In this case, going overboard doesn't hurt the underlying play--it's as if Bauman is as blessed as the English troops, to throw all those ideas into the fray and wind up with only a few scratches.

This polish is owed to the cast's buffering. From the slightly overboard antics of Trevor Vaughn's roguish Pistol, whose confidence is all lip-licks and wide-eyed winks, to the broad brogue of Luis Moreno's Fluellan, whose sturdiness snaps into focus thanks to a leek, this is one of the most energized tellings of what is often portrayed as one of Shakespeare's slow history plays. And if these dings sparkle, watch the outstanding actors shine. As Exeter, David McCann is the stern solemn advisor to Henry--but as the squeaky, complaintive Nym, he is irrepressibly goofy. Furthermore, his portrayal of a captured French soldier begging to be ransomed is full of raw emotion.

Many of these compliments are also due to Scott Whitehurst: not only does he nail the postures and accents of characters as diverse as the French King and the Archbishop of Canturbury, but he makes their more technical speeches a joy. And you should see him play a looser role--like that of the violent Bardolph or the disgruntled soldier, Williams! Even Nick Dillenburg has an opporunity to double-up, matching his solid portrayal of Henry with that of the shady Dauphin. As for Erin Moon--she's unfortunately underused in this play of mostly men, but not underappreciated for the life she gives to Katharine, who is forced to wed Henry in one abbreviated scene, and the Governor of Harfleur, who resignedly surrenders to Henry's wrath.

Given all this, the haphazard moments--screens from a military FPS, a goofy vlog, and a weird French sitcom--are easily overlook'd. With a president--er, director--like this, we're happy to go Into the Hazard.