The Roses on the Rocks

A play about a teenage Latina prostitute confronting her dead pimp’s wife is a flawed yet surprisingly tense and moving study of love and power, despite what the synopsis makes it seem. 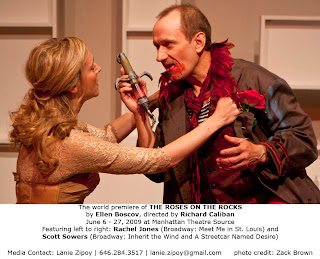 A 14-year-old, HIV positive, brassy Latina prostitute confronting her dead pimp's wife is either the premise for the year's edgiest comedy or most melodramatic tear-jerker. Luckily, in the able hands of writer Ellen Boscow and director Richard Caliban, this play becomes a tale of ego, power, love and (possible) redemption as two women—Peggy, the wife, and Blossom, the teenager girl—try to carve their own happy experiences from the sordid mess thrust upon them.

Blossom first appears attempting suicide in grand fashion, pointing a knife at her chest on a dark and stormy rock (the storm courtesy of flashing lights and fantastic live cello and violin accompaniment). But the ghost of Bill, her pimp, appears and stops her. Bill, dressed somewhat like a pirate in a long coat and boa, appears benevolent, preventing the young girl from going through with her brash act. But the ambiguity of Bill's motives are what give the first act its tense power, which seems almost inadvertent for a play that embraces such a strong feminist viewpoint (and for a playhouse that keeps copies of the journal "Estrogenius" behind glass in the lobby). The man is the most intriguing and powerful character: the women remain beholden even to his ghost.

Following his intervention, Bill requests (nay, demands!) that Blossom visit his wife, Peggy, who is as white as can be. Now Bill's fun begins: at first it looks like he’s making amends for his double life by reconciling his prize prostitute (of many, we learn) with his doting, bland, wife. He appears only to Blossom (he refuses to say exactly why) and urges her to slowly transgress more and more of his wife's delicate boundaries. Peggy is in mourning, and hence not very welcoming to Blossom's assertions that, no, she was not one of Bill's charges at the shelter, but in fact his whore and sex toy. As Bill whispers these bombs—for instance, he thought Peggy’s pussy was too hairy—to his unsuspecting widow (through Blossom’s ear), his pleasure becomes clearer and more disturbing.

The actor playing Peggy, Rachel Jones, acts out the naive wife's shock and unbearable discomfort with incredible realism. She trails off, fakes smiles, and fumbles for words so evocatively that it is hard not to run on stage and give her a hug. For her part, Laura Montes, asBlossom, plays the bombastic Latina stereotype with unexpected subtlety, letting her prickly attitude soften ever so slowly as Bill's grip on her loosens. And Scott Sowers, as Bill, is an asshole, and he is very good at it.

From here, The Roses on the Rocks becomes a desperate struggle between the three characters. Peggy strives to redeem her naiveté and implied complicity with Bill by legally adopting Blossom and embracing this embodiment of Bill's dark secret life. Blossom slowly and reluctantly fights to wrest control of her own life from Bill. And Bill, despite his claims that death has made him a superhero, fights to manipulate both women into surrendering their happiness and love to him and him alone.

The first act’s struggle and shifting loyalties between characters make for potent material. In particular, Bill's attention toward Blossom grows more and more disturbing. Imagine watching a balding middle-aged man with a gravely voice (and dressed vaguely as a pirate) grope the teenager, telling her he owns her and describing how he once ripped the clothes off her "slender, nasty, little-girl doll body."

Other scenes aren’t as intriguing. In one that comes dangerously close to hysterical and sentimental melodrama, we learn that Peggy and Bill once had a child of their own, but it only lived for one day. "Dear God, make our baby cry and smile again," Peggy pleads. In this dreamy sequence (it’s often hard to tell what’s real and what is not) Bill puts on a devil mask and makes a deal with her: he will take the baby (not coincidentally named Blossom) to hell for 15 years at which point she will judge whether Peggy is fit to be her mother or not. The whole deal with the Devil is somewhat confusing and forced. The audience now has to piece together the bet with the devil rather than absorbing the truly fascinating stuff of Bill's fight for power over these two women from beyond the grave. This along with Bill's habit of breaking out in rhyming soliloquy ("Urchin venom spines that gleam / Fish heads dipped in gasoline") are the most serious threats to the play's integrity. They swerve the action between surrealism and the cheesily supernatural, the latter of which reduces the strength of the former. It’s no surprise that the strongest thread in the play—the domestic drama of the milquetoast Peggy struggling to smile through the adoption and acceptance of Blossom, and Bill's attempts to derail both of their attempts at happiness—is firmly grounded in reality of human relationships.

Each character's quest for self-determinacy and control is focused on a central image: Peggy's is based on a creepy doll named "First Bloom" (the play is heavy on the flower imagery), which was made from her child's death mask and her own hair for $15,000—the same price Bill paid for his own Blossom. Blossom's quest is to reclaim what she was before Bill bought her at age 9, and manifests in memories of her mother, played by an actress who dreamily swirls on stage and provides her daughter a benevolent balance to Bill's violently sexual machinations. And Bill's quest amounts to shattering these dreams for both women, often quite literally, especially when it seems like they are becoming closer and comforting one another.

Bill's attempts to turn each woman into a controllable puddle of dependency become more and more fevered, only to suddenly dry up. The second act falls into a predictable second act and loses the seething tension of the first act. The first act was a rose growing, against all odds, from a rock. The second act is more like finding moss there instead.

Once Bill transforms from slyly sinister to outright barbaric, the power drains quickly from the play. He makes the last scenes a trying combination of brutality and boredom. Thankfully the lingering strength of the first act is never totally erased, and the actors are strong enough to keep the audience invested in the fate of the characters. But it is ironic that a play so committed to its feminist message ultimately leans on the male character for so much its narrative force. The finale is mercifully short and vague about the outcome of the battle for Blossom’s soul, but it is a shame that such a strong start couldn’t be followed up with a better finish.