Richard Hymes Esposito uses This Isn’t Paradise to focus on the uphill crawl toward success in the real estate business. Set at a boutique midtown agency, twentysomething male brokers log fourteen-hour days as they sign new clients and argue with landlords. But just as they can’t sell their twelve-plus percent fees to their clients, neither can the show sell itself to the audience. 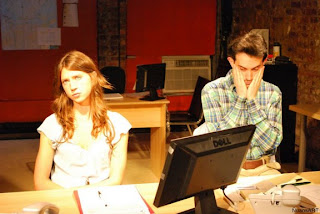 Though the setting is as modern as it gets, Richard Hymes-Esposito’s This Isn’t Paradise seems dreadfully old. The cube rats of this Manhattan real estate office are anxious about the current economy and excited about the new opportunities Obama is providing to a more diverse population, but these worries and upbeat remarks quickly become overused. The end result doesn’t so much reflect the current economic climate as bitterly dispute it.

Robert (played by Hymes-Esposito) is a senior broker, who, as an alpha dog, alienates coworkers and intimidates clients. Despite the long hours, endless apartment showings, and “lots of money” he makes the agency, he also spends a good amount of time shadowboxing around the cubicle, bragging about the time he puts in at the gym, and spouting anti-liberal rhetoric. But while Hymes-Esposito’s able to write this part, he’s never able to inhabit it. Skinny, slightly hunched over, and with a nasal voice and scraggly facial hair, Hymes-Esposito is no cocky white-collar suit. He argues in a raised near-whine, he hovers eerily while fraternizing, and he has absolutely no rapport with clients, which makes one skeptical of his status and five-year track record.

Worse, Robert’s comments are ignorant one-liners that cut off the possibility of stimulating conversation. Esposito’s insights on politics and the economy are as deep as the New York Post’s headlines, and the only thing that makes it bearable is David H. Holmes, who plays a coworker chock full of amused responses. He’s pitch-perfect as a slacker, and he manages to be adorable and insulting at the same time. When he’s with Esposito, This Isn’t Paradise finds its pace, becoming a rapid-fire tug of war between two equally sarcastic minds.

The same can’t be said for the new junior broker, Heather (Elizabeth Woodard), a sexy, savvy single mom who is eager to make commission—but not at all open to Robert’s advances. However, she’s never given a chance to develop—instead, she’s used as a left-wing foil for Robert and as a sex-pot, made to enter each scene in low-cut wrap dresses and skin-showing camisoles. Woodard plays her shallowly, too, taking on an infuriating plastered-on flirty-ditzy persona. If she’s learning something on the computer, of course she touches her coworker’s arm; if a coworker is stressed, of course she gives him an empathetic, lingering hug. It’s hard to believe, and far from a progressive take on either the current job or real-estate market.

Given the ill-fitting 70s soundtrack (soul and motown hits from Stevie Wonder and the Jackson Five), the whole production resembles a pre-Reagan recession—not a post-Obama one, complete with Second-Wave Feminism workplace ethics and racial bias in the hiring process. In fact, the only modern thing about this play is Craig M. Napoliello’s set design, which tacks real estate maps of the Tri-State area onto the upstage wall, sets up rows of dreary desks replete with the general office equipment, and then playfully puts a bobble-head figurine of Barack Obama on one of them. It’s not enough to update the rest of the play, which is muddled and unbalanced, and if you’re deciding whether or not to sit through This Isn’t Paradise, the title says it all.