Lanford Wilson’s Fifth of July has no shortage of laughs and dramatic revelations of secrets and personal turmoil. Despite the 1970s setting, featuring sex, love, drugs, and anti-Vietnam War sentiments, director Peter Jensen’s revival presents a wonderful, soap opera-like glimpse into the life of an ostensibly normal Missouri family that is relevant even today. 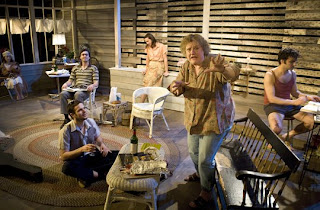 When American playwright Lanford Wilson wrote Fifth of July in 1979, and premiered it in New York City in 1980, he portrayed American life in the wake of the Vietnam War. At the time, the show was relevant and possibly controversial, drawing real-world comparisons to the state of American society and culture. T. Schreiber Studio produces this 2009 revival about a gay Vietnam War veteran, which is still relevant today.

Like any good soap opera, Fifth of July supplies the audience with an assortment of characters, each with their own personal problems and issues, to satisfy the dramatic appetite. Sally Talley (Lucy Avery Brooke) is the matriarch of the family, who is both stubborn and delightful, comically attempting to speak to UFOs in the sky. Aspiring singer Gwen Landis (Jamie Neumann) and her guitarist friend Weston Hurley (Jonathan Orsini) epitomize the 1970s: engaging in free love (Gwen and her husband John have sex while everyone expects they are changing their clothes), smoking pot, snorting cocaine, and expressing their condemnation of the Vietnam War. Jamie Neumann puts on a stand-out performance as the tripped-out Gwen, who amusingly--and abruptly--transitions between passionate outbursts of anti-war protests and paranoid apprehensions about funerals. At the center of the drama is Ken Talley, who returns to his life in Lebanon, Missouri after losing his legs in combat. The Talley family, including Ken’s aunt Sally, Ken’s sister June (Ellen Reilly), and June’s precocious daughter Shirley (Lily DePaula), intends to spread the ashes of Sally’s late husband Matt, who died one year ago.

While this production is arguably a historical look into American life in the 1970s, audiences might look to Fifth of July as a prediction of what is to come for current American war veterans returning home. Ken Talley (David Villalobos) appears happy and well-adjusted to his post-war life, living with his lover Jed (Edward Campbell), but later confesses his fear of resuming his role as mentor and teacher to his students, given his current disability. He seeks to escape this by selling the family house and moving away. That Ken Talley is homosexual bears little controversial weight on audiences of the 2009 production. The real question is the universality of Ken’s feelings after experiencing war and whether or not it parallels the veteran experience today. David Villalobos' performance illuminates this question, most notably in the last scene when a physical confrontation with John Landis (Michael W. Murray) ends with Ken falling on his back. A pin drop could be heard at this moment, as Villalobos is forced to remain completely still from the waist down.

T. Schreiber Studio’s production of Fifth of July coincides with the Broadway revival of Hair, the anti-Vietnam War musical set in the 1960s. While both shows focus on similar issues and the greater implications of war on the human spirit, Fifth of July is not the rebellious hippie that Hair is. Still, the revival of both shows suggests the public acknowledgment of the historical parallelism between the aftermath of the Vietnam War and the current – and seemingly perpetual – Iraq War today. Despite the weight of Fifth of July’s dramatic implications, audiences will enjoy the show’s successful balance between humor and conflict. Director Peter Jensen does a wonderful job of making the play an ensemble piece, a quality that is often overlooked in more mainstream theater shows.