Punkplay, the first of three plays in the “summerworks” festival at the Ohio Theatre, is an exciting, ferocious new play by Gregory Moss, transcending its subjects of punk, the 80s, and adolescence to form a kind of intense and meaningful fever dream, an ode to individuality and, for all adults struggling to make sense of their youth, a nostalgic and insightful look back. 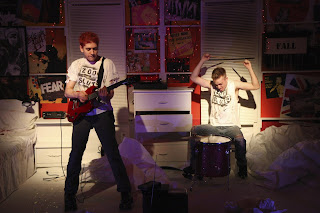 Punkplay, an excellent new play by Gregory Moss being presented as part of the Clubbed Thumb’s “summerworks” festival, is much more complex, introspective, and intelligent than it sounds. In the hands of a less exciting writer, the story of two boys in s America discovering punk rock in the shadow of the Cold War might have degenerated into any of a number of inferior plays--losing itself, say, in meaningless apocalyptic fantasies or T.S. Elliott rants (about darkness and decay and subversion), or happily devolving into a nostalgic ode to punk fandom. Instead, Moss 's play transcends the obvious traps of its subect: it is neither a meaningless exercise in apocalyptic fantasy nor a nostalgic episode of energetic but empty fandom, but a complex, atomic play--never for a moment clichéd, simple, or meaningless. When Punkplay flirts with the apocalypse, as it often does, it does so for specific and important reasons; when its characters choose punk, they do so as part of a powerful statement about the nature of cultures and counter-cultures, freedom and control. Directed with insight and passion by Davis McCallum and acted with sincerity and energy by Alex Anfanger, Michael Zegen, Carie Kawa, and Matt Burns, Punkplay is an adult play with the energy of an adolescent fever dream: brimming with life, Moss’s work surrounds its protagonists with puppets, surrealist sequences, intense punk rock interludes, three-dimensional characters, violent and virulent language, and a powerful and compassionate analysis of the rarity of true individualism, the whole chaotic and mesmerizing whirlwind forming into a fabric of hormonal urgency that, like the play’s intensity, is a metaphor for adolescence itself.

If that all sounds very abstract and intellectual, it is and it isn’t. At its core, Punkplay is a coming of age tale—an extremely funny, and appropriately awkward one. It begins in the Spring (as symbolized by the word “Spring” on the wall of Mickey’s room, one of several such signs delineating objects as “porn” or “records”). Mickey (Zegen), a middle-class suburban kid, meets Duck (Anfanger)—the proverbial, world-wise subversive. After running away from home (after a disagreement with his father, or because Duck finds glamour in being an outcast), Duck moves in with Mickey. As the seasons go by, Duck becomes, in his own mind, a beacon of enlightenment; he disparages Mickey’s consumer culture and offers him (or really pressures him into accepting) its antithesis—punk rock. Duck is oppressive and often nasty—he indicts everything in Mickey’s life he doesn’t understand or like as not “punk enough,” including Mickey’s taste in girls, music, and fashion.

The boy's dynamic, often shrouded in energy or homoeroticism, but never forgotten by the playwright, is established at the very beginning of the play: the first time Duck enters Mickey’s room, he criticizes it for not being anti-conformist enough (full of, say, rock pictures and signs of entropy), and Mickey responds that he keeps it that way because he “likes it clean.” To Duck, individuality is subverting an individual’s own desires or self to a counter-culture—to Mickey, it is less defined than that but far more individual—a quieter embrace of personal taste that asks for no confirmation from the outside world. These takes on individuality define the two characters: Duck is angry and insecure, and his love of punk and supposed hatred of America is increasingly dogmatic, whereas Mickey is more genuine and open, and increasingly confused as to why everyone is always trying to tell him how to act.

As the play continues, Duck becomes meaner and more controlling as Mickey begins to understand the nature of the rules of “punk”—as Mickey, in effect, grows up, leaving the simplicity, artificial safety, and ultimately fear of Duck’s world behind—and the play builds well to its inevitable confrontation. When Mickey finally rejects Duck’s oppressive adherence to the “punk lifestyle,” he does more than simply question why he is expected to submit to unwritten, totalitarian rules (the fabric of societies, of the American 80s, and certainly, of high schools)—he questions whether or not punk is really subversive at all, striking out at the idea of “counter-culturalism” itself. “You talk just like them” Mickey says to Duck, referring to the “jocks” and the "cheerleaders": the language of punk, at least for Duck, is just as homophobic, just as repressed, just as boring, in effect, as the 80s family values it pretends to despise. As Mickey finally steps into the real world (as symbolized by a clever, if strange theatrical usage of roller skates), he does so by rejecting the false security of conformity and dogma--whether it wears a polo shirt or the glam moniker of a punk rocker.

Broadly, Moss’s play is a coming of age story for Mickey, a funny, sexual, earnest play that hides violent and powerful truths just beneath its innocent and entertaining exterior. And, yet the play is about more than Duck or Mickey. The 80s, Moss suggests at the beginning of the play, are like the grundel of (caught between the balls and the asshole, so to speak). But, though he says it in a clever and irreverent way, what Moss really means is that the 80s are the collective adolescence of modern , and in this respect, the play is not just a coming of age for Mickey, but a coming of age for American society itself. The play, witty and fun as it is, hides patches of darkness at its edges—Moss packs in allusions to the cold war, a reference to the AIDs crisis, virulent homophobia—and any student of modern history knows that soon the internet will tear holes in the claustrophobic little white box of Mickey’s room, its only avenue to the world a tiny television set that, tuned correctly, peeks out at the Soviet Union with childlike innocence. The 80s, a time of dogmatic family values and equally dogmatic counter-cultures, will soon close with dramatic changes in American society, and violent revelations. And this connection, between the classic coming of age story, and ’s coming of age, is perhaps the smartest and subtlest revelation of Moss’s play. For even as the play lures its audience in with its clever lines, its feverish sexcapades, and its nostalgia for the dark ages before the internet transformed the innocence of Mickey and Duck into an anachronism, Moss’s work, like adolescence, like the 80s, hides beneath its surface violent truths on the verge of ripping the comforting fabric of childhood asunder. Go see it, while you can.