Give and Go: Learning from Losing to the Harlem Globetrotters

Investment banking and basketball usually don’t mix together as the foundation of a one-man show, but for Brandt Johnson, it’s just one of many life experiences he’s willing to share in his semi-autobiographical piece Give and Go: Learning from Losing to the Harlem Globetrotters. 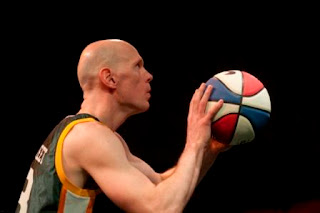 Most people with lifelong obsessions remember where it all started: Brandt Johnson’s love of basketball started as a child with a Nerf ball and removable plastic hoop that could be reattached to any spare surface. In his one-man show, Give and Go: Learning from Losing to the Harlem Globetrotters, Johnson tells the story of Billy Tyler, a goofy, hopeful athlete who practices hoops nonstop on his homemade blacktop and carries his basketball to class. In the process, he plays a variety of characters, from the sheepish grins and baggy nylons of Tyler’s awkward teens to the touchy-feely empathy of a guidance counselor or the boot-camp freshman coach, Krinko. This high-speed performance (he rapidly changes clothes and character onstage) complements the ways in which Billy’s passion for the game propels him past each roadblock.

It also sets a nice contrast with Billy’s decision to forgo the slim chances of making the NBA, choosing to apply his work ethic and competitive streak to Wall Street. The designer suits and growing commissions only keep him away from his first love for so long, however: one day on his way to lunch he sees a game of pickup across the street, unbuttons his suit to reveal a jersey underneath and shouts, “Hey, fellas! I got next!”

It’s a delightful performance, brimming with bright-eyed optimism, and Johnson’s writing has just as much heart. Even a simple memory of the time he started in a varsity game while still on the JV team, brings a sense of warmth and modesty that is not overdone. The tough life lessons never get preachy and the soul-searching always serves a purpose, from the direction Billy’s life took after college to realizing (five years later) the wrong decision he made.

Director Ron Stetson helps Johnson create space in a small black-box theater through crafty blocking and strategic props, turning the stage into a full-court gymnasium so deftly the audience doesn’t pick up on the illusion. Original music by Keith “Wild Child” Middleton completes the sports atmosphere with thumping electronic bass lines when the going gets tough and trailing, high-pitched flourishes that bring Billy back to his childhood idealism. Give and Go: Learning from Losing to the Harlem Globetrotters, may be about losing, but the story and writer/actor behind it wins over audiences.