The Cradle Will Rock

Marc Blitzstein’s The Cradle Will Rock originally premiered in 1936, when America was in a devastating economic decline, arguing with overseas investors over the value of domestic goods, and facing pressure from labor unions over the cost of manufacturing those commodities. In this riveting, riotous revival, Theater Ten Ten keeps Blitzstein’s spirit alive with a shrewd yet vivid production, keeping in mind the show’s significance to a modern audience. 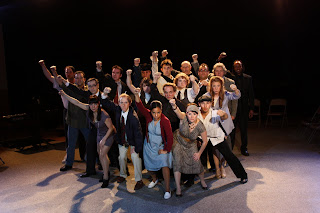 Steeltown USA has had a tumultuous past few years, as the dirty outside world of war, money, outsourcing and gentrification have infiltrated its sleepy existence. What was once a self-sustaining town with respectable and polite law enforcement, friendly neighbors, and caring, conscientious politicians, now threatens civilians with arbitrary new laws and issues layoffs to anyone unwilling or unable to bend to the new demands of labor production. As the worldwide demand for steel rises and falls, money goes in and out of Steeltown, but only for a select minority, while women, immigrants, and artists must all find ways to survive. As the title song goes, if things stay this way, The Cradle Will Rock.

This whirlwind musical drama touches several serious and thought-provoking social and political issues all with sensitivity and intelligence. A high-spirited Eric Thomas Johnson provides piano accompaniment, with a passionate commitment to Blitzstein’s score. The witty, idiosyncratic lyrics help create conflict and depict roles, similar to a Stephen Sondheim musical where stories and conversations often show through the music just as much as the action. When Moll (Bellavio Mauro), an impoverished prostitute enters in the opening scene, the music slows down and stretches out while her sorrow and frustration swell and her strong alto timbre wavers, struggling to make a dollar. She soon gets whisked away to jail by an aggressive, egocentric detective named Dick, played with a bullying, boisterous energy by Michael Baxter.

The energy changes instantly when the Liberty Committee enters, unsure of their role but eager to please the man who appointed them, wealthy business man Mr. Mister. A burst of harmony explodes, delving into another layer of Steeltown. Nothing ever slows down for more than a minute—a pause in the music here or a flash of a fadeout there—before Johnson’s skilled and upbeat piano playing resurfaces and the action resumes.

And there’s plenty of action. In the first act alone, a crooked reverend accepts donations from Mrs. Mister (Tessa Faye, a shrewd businesswoman in socialite’s clothing) in return for brainwashing parishioners, the Liberty Committee gets detained for hours in jail, and labor riots take place outside the steel factory. The second act adds themes of unionization, to say nothing of the heroic Larry Foreman (Josh Powell), who at last appears with a rebel attitude and Elvis Presley croon, handing out leaflets and advocating workers’ rights. Things continue to heat up throughout the play until it all bubbles to the surface, and that’s the fun—and the point—of The Cradle Will Rock.

Viviane Galloway’s charming, nearly comically conservative costumes (nothing is cut above the knee or below the collarbone) tie into the show’s theme with superb accuracy, as does David Fuller’s directing. Under Fuller, the characters are inflated enough to take full advantage of the script’s tongue-in-cheek remarks. Mr. Mister (Bill Newhall), for example, swaggers around stage as a bloated, ruddy-faced corporate hog who can still talk the talk when necessary to appease investors, all in a faultless three-piece suit and unwavering, soothing tone. Judith Jarosz’s sprite choreography completes this period revival, with a stunning homage to classic 1940s Broadway, performed with perfection by each cast member. A sobering yet inspiring story of proletariat idealism striving to exist in a society run with strings attached by money-grubbing moguls, The Cradle Will Rock couldn’t have come at a better time, nor could it have been produced by a better team.