Axis Company's stylized and cerebral production takes us through the detonation of the first atom bomb. 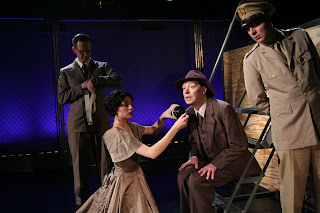 J. Robert Oppenheimer, aka “The Father of the Atomic Bomb”, spent many difficult years testing the atom's capabilities, but the rest of us need the stage to empathize with his journey. Axis Company's Trinity 5:29 dramatizes his turmoil quite well; taking calculated liberties with time and space, they successfully show the driving influences behind the Manhattan Project. They are Jean Tatlock (Britt Genelin), Oppenheimer's one-time lover and suspected communist that had already committed suicide almost a year before the first testing, Harry S. Truman (Brian Barnhart), a president hell-bent on preventing the invasion of the U.S at any cost, and General Groves (Marc Palmieri), a card-carrying patriot whose heart was in the right place even if his trigger finger wasn't.

Trinity 5:29 may be formulaic-that of a medieval cycle with poetic dialogue and Biblical emulations (Truman is God, the detonation the Apocalypse)-but the actors, wearing Elisa Santiago's crisp, period costumes, perform well outside of the box. David Zeffren's fancy lighting design, Steve Fontaine's doom and gloom music, and Kyle Chepulis' bomb shelter replica work together to create a wonderfully extravagant production. The production even uses foreshadowing well-the play opens with Oppenheimer poised to set off the bomb and revisits that harrowing scene at a pivotal, Revelations-like moment.

Sandwiched nicely between the impressive production elements are glimpses of Oppenheimer's psychological torment. Edgar Oliver plays the theoretical physicist as brilliant but bewildered, knowledgeable but naive. His insistence that his atom bomb is safe, best demonstrated by his willingness to drink the condensation from the bomb's conductor, is a clear indicator that death and destruction was not on his mind when he created the bomb. This creates a compelling moment, but it defies historical accounts of Oppenheimer being aware from start to finish of the bomb's dangerous potential. Yet, the guilt and regret that Oppenheimer felt about partaking in this dark moment in history is at least implied, if not portrayed.