Jailbait starts with a simple moral issue--two fifteen-year-old girls getting involved with two thirtysomething "boys"--but thanks to Deirdre O'Connor's exceptional writing, the cast's dead-on characters, and Suzanne Agins's lightly emphatic staging, it quickly becomes something far more emotionally complex. It's as compelling as it is comedic: it's bait, in other words, that you won't mind being hooked on. 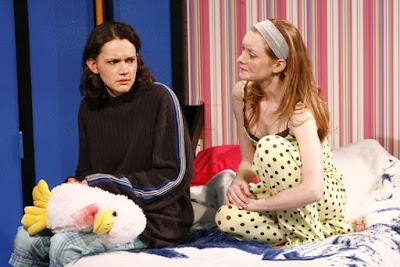 "We're fifteen," says Emmy (Wrenn Schmidt), expertly putting Chanel on her friend, Claire (Natalia Payne). "Everything fun is illegal." Well, if that's the case, then Deirdre O'Connor's clever (but not too clever) Jailbait ought to be locked up. Of course, before one throws away the key, let's acknowledge the good behavior of this exceptional four-person cast, and allow director Suzanne Agins to get off with community service--that is, the continued performance of this wonderful new play.

Jailbait is one of those shows that's suited for the stage: after all, Emmy describes what they're doing--sneaking into a club and fooling around--as "improv, but in a bar." With such casual lies and glib banter ("They're just over twenty-one. They're not like girl-crazed date-rape machines"), O'Connor is able to play a shell game with the play's stakes, hiding, under a veneer of confidence and painted-on smiles, the dangers of growing up too quickly.

Aiding this illusion are the play's male counterpoints, Mark (Peter O'Connor) and Robert (Kelly AuCoin), who, despite being thirtysomething, are hardly emotionally mature: Mark's embraced the bachelor lifestyle and Robert can't get over the end of his six-year relationship. Both pairs try to make things less scary by drinking, and both act just as awkwardly. The elegance of Agins's direction stems from the way Claire and Robert connect, as if age doesn't matter--and the wonder of O'Connor's deceptively comic writing is that she leaves enough ambiguity for one to wonder if age does always matter.

Subtle aesthetic choices help to emphasize this, like Kina Park's set, which folds Claire's bed--a sliver of innocence--into the recesses of a club's neon tubes and dirty walls. Rebecca Bernstein's costumes go a long way, too: much is made of Robert's attempt to "fit in" as he painstakingly folds his tie and unruffles his shirt; the same goes for how uncomfortable Claire is with the attention her comfortable black dress gets her. It gives the actors a lot to work with--although Payne's character resembles the childish immigrant in Aliens With Extraordinary Skills, the context shifts her energy. Wrapped in a sweater twice her size, sitting on a small bed, and wistfully clutching a stuffed duck, she's not acting alone.

Jailbait's not a particularly complex play--in fact, the majority of plot points are fairly obvious. However, these "big revelations" turn out to be hiding a variety of sad, small moments, from the way Robert foreshadows a miscarriage by mentioning Goodnight Moon to the way Emmy's constant needling of Claire and her pride in not being an "awkward sophomore" (she's done it twice) eventually gives way to her childhood regrets. When things are said straightout, then--"I can't find my underwear"--they're absolutely shattering, and wholly effective in illustrating O'Connor's conceit: what happens when fantasy meets reality. Given rich theater like this, who needs parole?