Two blindfolded hostages -- a journalist and a contractor -- connect through music, memories, and a hauntingly beautiful dead-end romance. This indie-rock musical has both rocking numbers and strong ballads, but it's the tender direction, the escape strategies from the horrors, and the performance of the leads that make this production memorable. It may deeply cut those with loved ones in conflict zones, but it may just also let them know that a little bit of peace can be forged in the midst of madness. 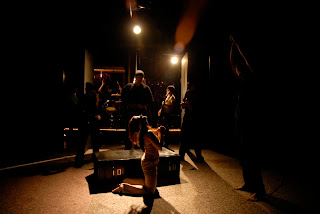 Right from the opening, Hostage Song rocks. The intro song, pounding in vocals and music, sets the tone for the show's momentum and drama. Choosing to present the musical in an unconventional way, Clay McLeod Chapman and Kyle Jarrow have put the music in the forefront instead of inserting it in poignant points. It works for enjoyment of the piece and comfort with material that isn't so comforting.

When we first see hostages Jim (Paul Thureen) and Jennifer (Hanna Cheek), they are blindfolded, bound, and Jennifer is covered in blood that is not her own. Despite the peril betrayed by these visuals and the overturned furniture, Chapman's dialogue makes us feel comfortable. The hostages are in the middle of a game, suggesting not only that their predicament isn't fresh, but that they need to pass the time in a trivial way to preserve their sanity. It is escape that they need, and we can't help but escape into their fantasies, too

Some standard things that we would normally associate with a hostage situation occur; for one, Jennifer's father broadcasts a plea for her life. Fantasy land is again confirmed when she rants and raves to distraction (and confusion) from his speech about her likes and dislikes. Who would be preoccupied with that at a time like this? Second, the militia come in, disappear with Jennifer, and bring her back harmed, but not visually harmed. Sadly, we know exactly what has happened to her without the articulation. But the standards end there.

To break out of the box, the hostages break out in song using microphones handed off to them by the band. The first instance of this is disconcerting and disruptive of reality, but the more it's repeated, the more you believe that it's the only way for it to be done. The band, wearing nondescript knit hats and dark jumpsuits, double as the militia; it's a strange and startling sight to see them switch from predator to prey, but it's also one of director Oliver Butler's many clever decisions. Jim's wife (Hannah Bos), violating the separation of time and location, delivers a monologue about her torment back home that's way too long, but it does bring a perspective into the show that many people can relate to.

The dialogue, direction and performers all collaborate to bring a softness to the situation that you may not have thought could exist. We know that they are doomed, but it's nice to revel in the good times with them when they are re-enacted. But not all of the fantasy scenes are pleasant. When Jim's son (Abe Goldfarb) shows up to reveal that his relationship with his father wasn't always great, it's heartbreaking to know that it will never be improved. He deals with the aftermath of his father's decapitation in a chilling way that no child should have to.