In order to be acquitted of war crimes, a Dutch painter must prove that a painting he sold to a Nazi is a forgery that he painted himself. Based on actual events, this production is compelling in it's presentation of moral dilemmas and passion for the arts, but poor voice overs, uneven acting, inadequate performance space, and overdone drama occasionally threaten its quality. Still, the premise is engaging, and the dialogue is often clever. You'll learn about the lucrative business of art forgery that's existed for a long time and not likely to disappear anytime soon. 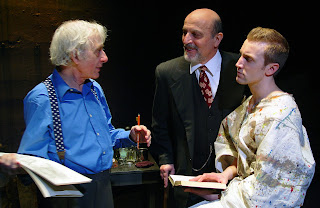 Most people have an appreciation for art; the beauty, the emotion, the captured moment, and its ability to tell a story. Few, however, obsess over its origin like renowned art critic Dr. Abraham Bredius in Another Vermeer. So when Han Van Meegeren claims that the Johannes Vermeer painting (The Disciples at Emmaus) he inadvertently sold to Reichmarshall Hermann Goering (second in command in the Nazi party to Hitler) is a forgery that he painted himself, Bredius refuses to believe it. Why? Because Bredius, who had praised The Disciples at Emmaus as a Vermeer original, can't admit that he was duped. But Meegeren has more problems than persecution from this critic. More importantly, he has the Dutch courts to contend with; courts that are ready to throw him in jail for treason and for fraud. He has to think fast.

Another Vermeer opens with Meegeren returning home in over-extended silence with his appointed guard, Bram Van Ter Horst. He needs to paint a convincing replica of Vermeer's Jesus Among the Doctors to clear his name from the treason charges. Immediately, the size of the Dorothy Strelsin Theatre becomes a factor when large paintings are carried unto the set; the small space that is in close proximity to the house seats makes the entrance awkward. Unfortunately, Meegeren isn't the forger that he used to be. He hasn't been able to produce any work that's as great as the Emmaus, due to chain-smoking, too much absinthe drinking, morphine-laced sleeping pills, and too much cockiness. He's going to need more than his skills with the brush to get him out of this tight spot. Bram Van Ter Horst (Justin Grace), the righteous guard assigned to watch over him, helps out a little bit by posing as his muse and engaging him in some philosophical and religious conversation. Despite Van Ter Horst's condemnation of his crimes, he is Meegeren's nicest acquaintance. Meegeren gets hell from all angles, from Bartus Korteling (Dan Cordle), his old mentor, to Lieutenant Thomas Keller (Christian Pedersen), the cop anxious to see him go down.

Another Vermeer is a busy play, incorporating a lot of drama and food for thought in nearly two hours without intermission. The characters not only appear in person, but appear as poorly constructed voiceovers shrouded in silhouettes too. Austin Pendleton portrays Meegeren as a somewhat coherent, witty, sympathetic, fully impassioned individual, and that's expected given what we know about Meegeren's history. In spite of stumbling over dialogue several times, he delivers a good performance.

Under Kelly Morgan's sometimes tentative direction, Thom Christopher's booming voice and sinister aura supports his role as Bredius, but there are key moments where his performance is too reminiscent of Carlo Hesser, his former mob boss character on One Life to Live. Dan Cordle shines as Korteling, bringing the right amount of disgust and indignation to the role, but flails as Vermeer, mostly because of the impotent and inconsequential way that the role is written. As Keller, Christian Pedersen looks the part of a persecuting officer, but during what is supposed to be a particularly violent moment with Meegeren, lacks menace and forces Pendleton to overact. Justin Grace gives Van Ter Horst the kind of innocence that no one else possesses, and an uninformed appreciation for art that many people have. He reminds us that you don't have to be learned and cultural to appreciate fine art. Although out of his league for most of the performance, he comes alive at the conclusion during a soft moment with Pendleton; the moment is drawn out, but Tony Kudner's beautiful lighting (which washes enlightenment and vulnerability onto his face) allows us to see his emotional range.

Another Vermeer asks us to measure the passions of an artist against the ethics of his craft. Although Robinson makes a good go of turning Meegeren into a sympathetic character, in the end, Meegeren can't be pardoned for what he's done. Vermeer absolves him of his guilt with his cameo appearance, but you won't. Much can be said about the skill required to duplicate art, and arguments can be made about the lack of originality in the industry. After all, the 20th century has spit out plenty of painters and sculptors that echo a classic style in some shape or form. However, a stolen name to go with the stolen style is unforgivable, especially when many forgeries and many millions of dollars are involved. It's wonderful to be able to expertly mimic someone else's style, but I say, and you will too, get your own. Still, Another Vermeer gives us a peek of a fascinating practice that we've probably encountered, but didn't recognize. What's hanging on your walls? Most of us don't really want to know.
..................................................................
Through April 20th. Tickets: $20. 212-868-4444. Abingdon Theatre Arts Complex 312 W. 36th St.New York, NY 10018
Posted by Cindy Pierre at 4/03/2008 12:07:00 AM